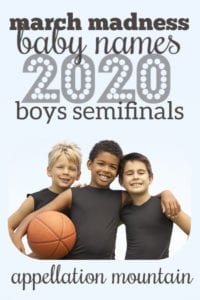 Time for the boys semifinals in March Madness Baby Names 2020!

Every year, we look at the most popular posts from the prior twelve months to determine the most popular choices. Appellation Mountain readers tend to favor a quirky bunch – the Top Ten here looks nothing like the US Top Ten.

Those names face off in a bracket-style match-up over the month of March, with voters narrowing down our favorites, until we crown a single champion.

While the initial list tends to be full of surprises, the names that win it all tend to feel far more mainstream:

We’ve already narrowed from sixteen names to eight, and then again to four. Let’s take a look at the contests that brought up to the semifinals:

Those are some pretty unambiguous results. And that makes me think the boys’ semifinals will be torturously hard!

Voting will remain open through Thursday, March 26th. Check back on Saturday, March 28th to see which names advance to the finals!