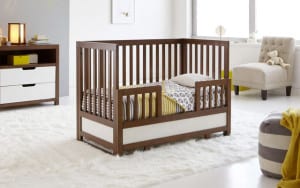 First things first: I’ve been meaning to start an Appellation Mountain newsletter forever, but what would I possibly include? And then you were so lovely with your response to the first Mailbag post that it hit me: that’s the newsletter. A theme of the week, and then answers to reader questions that you won’t find anywhere other than the newsletter.

First edition comes out Wednesday, and then every Wednesday after that!

Now, about that spare, modern nursery at the top of the post. Have you seen this idea from Wayfair? Find your nursery style, find your baby name. Or the other way around!

When I was expecting our son, I never quite got around to decorating his nursery. Sure, he had a crib and a quilt and a mobile. But other expectant moms I knew were designing rooms like “A Day at the Circus” complete with mock-big top ceilings and oversized plush elephants. And I was … really not in that space. Then our daughter came along, and her nursery was a corner of our bedroom. Again, no elaborate anything. I’ve sort of always wished for a do-over. (And we’re about to decorate both of their big kid rooms, so I’m finally getting a chance – but at 10 and 6, they have ideas of their own.) My favorite is the nursery meant for kids with names like India – sure enough, it’s one of my favorite names and a design that I would happily imitate, if I had the chance.