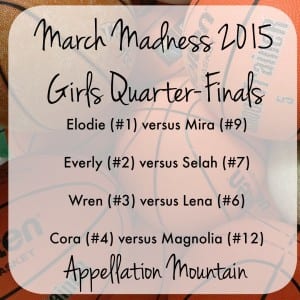 What an exciting opening round! The competitors in March Madness Baby Names for girls behaved more predictably than the boys – at least from my point-of-view. There were also more landslide victories in the girls’ opening round – four stunning defeats, versus just two for the gentlemen.

Here are the results:

If you’d like to catch up on past winners, you can read the Girls Opening Round post here.

Otherwise, let’s move on to the Quarter Finals!