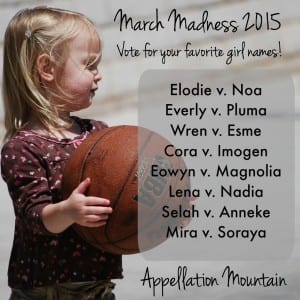 Every year, the sixteen boy and girl names with the most page views during the prior year compete for the March Madness crown.

Since many of the names profiled here are decidedly offbeat, the Sweet Sixteen looks nothing like the US Top Ten. In fact, most of the names aren’t even in the US Top 100. Some have never even flirted with the Top 1000.

The girls’ list struck me as especially quirky this year. Right below the top sixteen were a smattering of names that seemed more wearable: Clementine, Margot, Susannah, Sloane. But rather than disqualify some of these out-there baby names, I figured we’d play the game and see who ends up on top. Who knows? Maybe Pluma will have a real Cinderella story!

Winners from the past few years have been:

Now it’s time to vote in the opening round of March Madness!

The battle of the British! Downton Abbey’s Countess #4 Cora versus UK darling #13 Imogen

Right in the middle: #8 Mira takes on #9 Soraya

Thanks for voting, and check back next Saturday to see which names advance to the quarter finals!