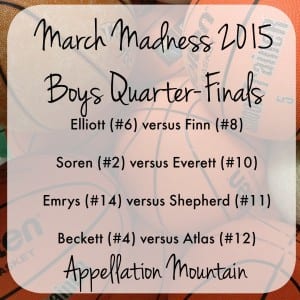 This is always the part of March Madness Baby Names that makes me the tiniest bit sad! The opening round is so full of possibility, and then … it’s the quarter finals and time to say good-bye to some favorites.

My favorites lost in five of the eight boys’ match-ups! Then again, the names that made it through are truly great, so it’s easy to imagine one of these eight names winning the whole tournament:

If you’d like to catch up on past winners of March Madness, read the opening round for boys here and for girls here.

Otherwise, let’s proceed to the match-ups for the quarter finals!

The victors of our two closest opening round matches face off: Soren (#2) faces Everett (#10).

Voting is open through the morning of Friday, March 20th. Check back on Saturday, March 21st for the next round!