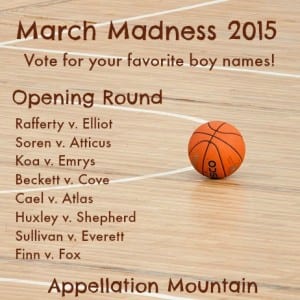 Every March, we hold our own version of March Madness here at Appellation Mountain. The contenders? The sixteen boy and girl names with the most page views in the prior year.

This means that the names in the competition can be a quirky bunch. And, just like in college hoops, the match-ups are by rank, so #1 faces #16, #2 faces #15, and so on. Some match-ups are so tough! They’ll inevitably eliminate a favorite early on.

But that’s why we play the game, right?

Now it’s time to vote in the opening round of 2015’s March Madness competition!

The battle of the surnames: #1 Rafferty takes on #16 Elliot

Can #5 Cael carry the day, or will the crowd’s approval rest on #12 Atlas?

The stylish v sound is found in both #7 Sullivan and our defending champion, #10 Everett.

Thanks for voting, and check back next Saturday to see which names advance to the semi-finals!