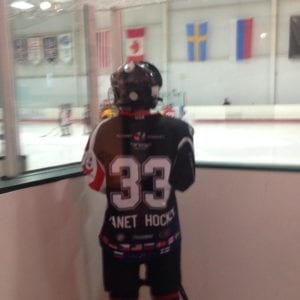 My son went off to ice hockey camp last week, and when I picked him up after the first day, another camper said “See ya, George,” as we walked out the door.

My son – whose name is Alex – explained that over lunch they’d talked about whether the other kids thought their names fit, and if not, what their names should be instead.  Instead of Alex – a name that has been the subject of much discussion between my son and I – they dubbed him George.

And he would make a great George!  It’s a family name on my dad’s side, the name of an uncle and my late great-grandfather.  It never quite made our shortlist, and none of my cousins have used family names.

I’d considered Georgia over the years, but seriously considered never George – and I can’t say why.  Could my positive reaction be part of a delayed Prince George effect?

Now, on to the exciting news – my birthday is coming up, which means that this upcoming week is packed with names that I’ve chosen – five straight days of crazy, would-you-really-consider-it choices.

As always, thank you for reading, and have a great week!