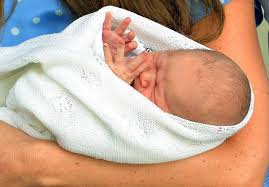 All of the speculation was correct!  The new Prince of Cambridge, heir to the throne behind his grandfather and father, is named George Alexander Louis.

It’s a conservative name, a safe and likeable choice.  But it isn’t an entirely traditional one.  While there have been plenty of kings who reigned as George, neither Alexander nor Louis have been in heavy use by the British royal family.

It’s also a short name.  William and his brother both have four names each, as do Prince Charles and his siblings. though the current queen is simply Elizabeth Alexandra Mary – but then, as the daughter of a younger son, she was fairly far down the line of succession when she was born in 1926.

Here’s a quick breakdown on the history of the names:

We all knew the prince wasn’t going to be Spencer or Jayden.  But I do think there’s a certain style and even modern sensibility to the name.  Seven syllables wouldn’t be out of place on a regular, non-royal child.

So what do you think of the future monarch’s name?  Will it be influential?  Which names – the first, one of the two middles, or all three?  How about feminine forms of the names – will Georgia and Louise see a rise?