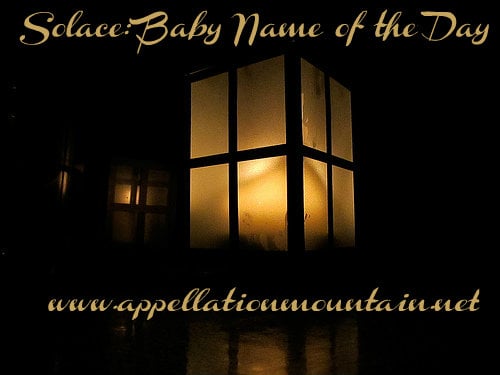 Word names are big, and modern virtue names are an important part of that category.

Thanks to Leah for suggesting one that could fit.  Our Baby Name of the Day is Solace.

Meaning matters in noun names, but there’s a wide range of acceptable meanings.  From spiritual picks (think Mercy or Praise) to fiery ones (Blaze or Ember) or outdoorsy choices (Cedar or Sky), the possibilities are endless.

But how about when a name leans melancholy?

In fairness, Solace isn’t really a sad or dark meaning.  It comes from the Latin solatus, to soothe or console, via French.  It brings to mind Marian names – names that honor the Virgin Mary – like Consuelo, Socorro, and Remedios.  They’re not upbeat names, but they have a long history of use.

Still, modern use implies that solace is given in times of distress.  It’s a synonym for consolation or relief.

Two US Navy hospital ships have been christened the USS Solace.  The first saw service in World War I, and the second in World War II.

So while it isn’t a word heard in every day conversation, it isn’t an obscurity, either.

Other uses are from the silver screen:

Despite not really being considered a given name, there’s a steady stream of men and women named Solace over the years.  The names in the US Census records are intriguing … was a child named Solace because of tragic circumstances around his or her birth?

That’s true for the high profile arrival who put this name on the map.  Solace Huxley Layton Campbell is the daughter of Sarah Layton and Hugh Campbell.  Sarah’s dad was Jack Layton, a Canadian political leader.  Jack passed away during Sarah’s pregnancy.  The couple has an older daughter called Beatrice, so this name feels like it can only be considered a tribute to Solace’s late grandfather.

Could it also be that folk etymology is playing a role here?  Many mentioned that solace reminds them of the sun.  Sol does mean sun in Latin, so it isn’t an unreasonable association.  And sunrise is an oft-used symbol of optimism and fresh beginnings.  Still, there’s no real link between solace and the sun, so it is a fresh meaning that parents are imposing today.

Overall, Solace seems like a deeply meaningful name that parents would only consider in specific circumstances.  It makes me think it might be burdensome for a child to wear as a given name, but a fitting tribute to a lost loved one or difficult circumstances in the middle spot.  Then again, with word names so mainstream, maybe Solace isn’t any less wearable than Prudence or Constance.