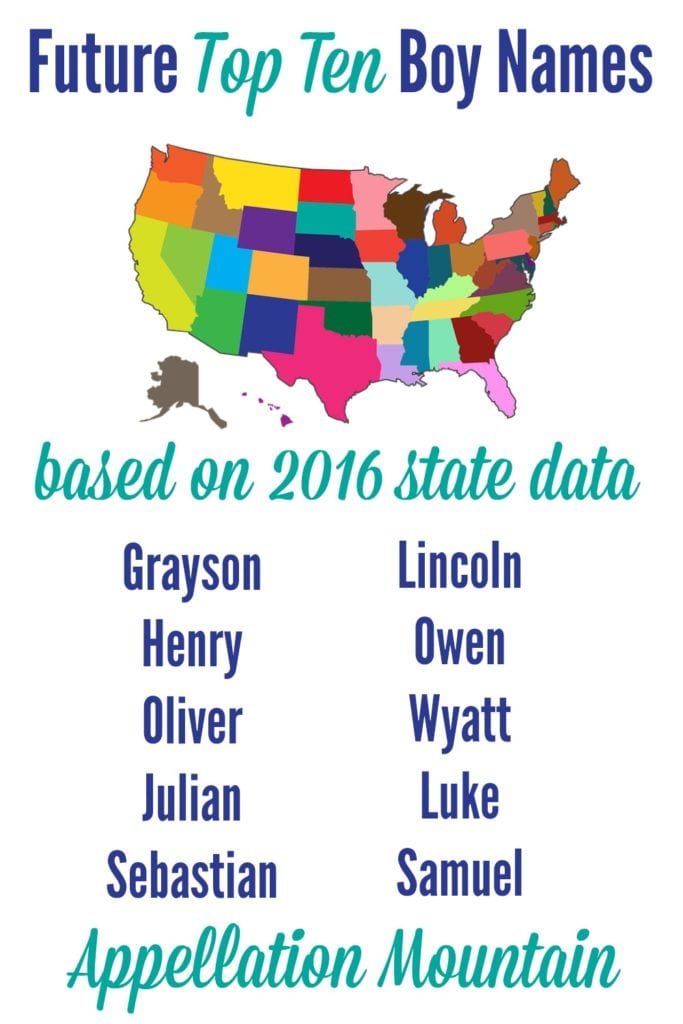 Ever since the new US baby names popularity data came out, I’ve been bothered by the stagnation in the Top Tens. On the boys’ side, eight out the Top Ten names fell in terms of actual use – percentage of births and number of children given the name. Only one name exited the Top Ten.

Mason, Jacob, and Ethan all dropped significantly in terms of actual use, even if their ranks declined modestly.

It turns out that this isn’t new. Here are the numbers from the last few years:

And so it seems likely that we’re about to see big changes in the Top Ten boy names.

Next Wave Boy Names: Where to Look

But where do we look for the next wave boy names?

About a week after the Social Security Administration releases the national data, they share state-specific Top 100s. Those Top 100s often feature rising names, names new to state-specific Top Tens that have yet to crack the overall list.

Some of these might offer the best hints at names to watch.

While a carter seems like a modest profession, as a given name, this feels preppy and polished. After so many years of consistent use, Carter almost qualifies as a modern staple, not a fleeting trend.

That -r ending could prove influential, too. After years of two-syllable boys’ names ending in -n dominating the charts, there could be space for the -r enders to rise.

Easton comes in at #3 in just one state: North Dakota. I’ve ignored a few other single-state names, but Easton caught my eye.

As with Easton, Ezekiel makes the Top Ten in just one state. And this time, it’s Hawaii – a list that tends to be decidedly different. Plus, Ezekiel fails to crack the US Top 100 – yet.

But Ezekiel reminds me of two popular picks – the long, high-value Scrabble letter Alexander, as well as the Biblical Joshua. Nickname Zeke brings to mind 1990s favorite Zachary, too. Even if Ezekiel doesn’t make it to the elite Top Ten, this one certainly seems headed for the Top 100.

Greyson broke into the Top 100 in 2016, but it is Grayson with an ‘a’ that makes the Top Ten in seven US states: Arkansas, Idaho, Iowa, Kentucky, North Carolina, South Carolina, and West Virginia.

This surname name with a touch of color has climbed steadily since the 1980s. Maybe that’s why it might be overlooked.

A regal classic with a long history of use, Henry has ranked in the Top Ten before, way back in the nineteenth century. A few classic boy names always fare well, but Henry marries the classic with the stylish. Celebrities have used it for years; so have plenty of everyday parents. It’s easy to imagine parents who might dismiss Joseph or John as too ordinary might still finding Henry charming.

Can you imagine naming a baby Hudson in New York? I’m not so sure. And yet, in North and South Dakota, far from the east coast, Hudson makes the Top Ten.

Seldom heard before a forgettable Bruce Willis adventure movie, Hudson has transitioned to become a standard surname pick for a son. With a chart that closely resembles Easton and Grayson, don’t count this name out.

Here’s the thing about Jack: for ages, John reigned as the top boys’ name in the US. Plenty of those boys probably answered to Jack, just like JFK and John “Jack” Nicholson.

Now Jackson is the most popular of the John names on US charts, while in the UK, Jack dominates. Massachusetts, Minnesota, and Utah agree with our European cousins. Could their influence spread?

We know that Jackson actually takes the top spot in the US, if spellings Jaxon and Jaxson were included in the count. But they’re not. Even so, in fifteen states, Jackson makes the Top Ten: Alabama, Arkansas, Iowa, Kansas, Kentucky, Maine, New Hampshire, North Carolina, Ohio, South Carolina, Tennessee, Virginia, Wisconsin, and Wyoming.

The distribution makes Jackson lean slightly Southern and a touch Western, perhaps, but this name claims broad appeal. Still, after hovering in the US Top 20 for the last few years, is there enough energy to push this name higher?

Maybe I would have ignored Josiah. The name only cracks the Top Ten in New Mexico, not exactly known for being a baby name trendsetter.

Except Elijah is the latest boy name to enter the Top Ten. Noah holds the national #1 spot. Plus Josiah’s chart is another one of those straight marches up.

So let’s keep a close eye on Josiah, shall we?

Julian makes the Top Ten in just three states: Arizona, California, and Rhode Island. It intrigues me for another reason: Julian works beautifully in Spanish, without being a clearly Latino name. Miguel and Jorge are at home anywhere in the Spanish-speaking world. Julian bridges the Spanish and the English. It’s the masculine equivalent of Isabella or Sophia.

Ever present in the US Top 1,000, Julian has appeared in the US Top 100 throughout the twenty-first century, slowly inching its way up the charts. Could there be enough momentum for this name to make the Top Ten? If Benjamin can make it, why not Julian?

While Lincoln boasts a long history of modest use, lately that has changed. Lincoln entered the US Top 100 in 2013. Today it keeps climbing, a modern name that feels traditional; a twenty-first century favorites with roots in the past.

It might feel like Lucas has already has its moment. After all, Lucas entered the US Top 100 way back in 1993. But the name has been given to a greater and greater percentage of children over the last few decades, until Lucas entered the Top 20.

We often forget that classic names, too, are subject to trends. That could be the case for Lucas in future years.

If Lucas is quietly inching up the charts, Luke has taken a bumpier path. Like Lucas, Luke has appeared in the US Top 100 since the 1990s. But today it appears in the Top Ten of just three states: Hawaii, Louisiana, and Oklahoma.

Still, Luke might fare better than any of the names on this list. That’s thanks to Star Wars‘ Luke Skywalker. Skywalker propelled his given name to new heights. With the original farmboy-turned-hero back on the big screen, could Luke get another boost in 2017?

It keeps company with Alexander and Benjamin – long names that qualify as traditional, but rank far higher today than they did in decades past. We love Oliver’s ‘v’ sound and -r ending. Another bonus? Gone are the days when every name is nicknamed automatically. If many Olivias are just Olivia, there’s no reason to worry that Oliver might be called Ollie – unless you appreciate that short form.

Looking for proof that two-syllable, ends-with-n boy names still have some steam left? The rise of Owen confirms it.

Parents have gravitated towards vowel-heavy names in recent years, and, as others have pointed own, Owen contains the same sounds as #1 name Noah, just re-arranged. It also feels like a fresh update on former favorites like Evan and sounds very much like the rising Rowan – but unlike Rowan, seems squarely masculine.

As with Henry, hearing a traditional name like Samuel considered trending feels funny. But consider this: Alabama, Colorado, DC, Maine, South Dakota, and Utah all put Samuel in their Top Tens. That’s a broad range of the US.

If Benjamin – Ben – has fared so well in the overall US Top Ten, can’t we imagine Samuel – Sam – coming along as his brother?

Ben and Sam go together; so do Julian and Sebastian. They’re names that fare well in English and Spanish, crossover choices that belong to neither language, but work beautifully in both

The states where Sebastian makes the Top Ten reflect this: Arizona, California, Nevada, New Mexico, and Texas. And yet, plenty of parents just plain appreciate Sebastian’s style – traditional, but unexpected.

Could Theodore rank in the US Top Ten eventually? It’s big in Minnesota, but only Minnesota. Still, this one strikes me as a parallel to Alexander. It’s a long name, with ancient roots, that shortens to a modern-sounding nickname.

Plus, like Alexander, Theodore brings a whole family of names along for the ride, including Thea.

Still, don’t rule out Wyatt nation-wide. With an appealing sound, Wyatt could catch on across the US. Along with -r ending names for boys, -t ending choices – like Elliott and Beckett.

Next Wave Boy Names: My Picks

So will any of these names crack the overall US Top Ten? It’s tough to say, but I’d bet on these ten:

What do you think? Can you imagine any of these names making the US Top Ten?