The top of the list offered few surprises. The ten most popular girls names remained remarkably stable. Only one change took place in the boys’ Top Ten.

But let’s look farther down the list, to the names entering the Top 100.

Why does this particular number matter?

First, expectant parents often cite it as a high water mark. We often say something like this: “We won’t consider names in the Top 100.”

And yet, these name often attract lots of attention. First, it feels like a nice, round number. Names in the Top 100 appear everywhere, and we talk about them more. (Likewise, names in the Top 1000 attract more attention than those slightly less popular names – even though the difference is slight.)

What this means: names in the Top 100 tend to rise, even though name-savvy parents may work to avoid them.

Avoiding them is tough, though, because they tend to be names with broad appeal. That leads to the other thing we hear a lot: “I would use Liam/Layla/Julian/Jack/Ariana if only it weren’t so popular!”

In many cases, I encourage parents to still use that favorite name. But if you know three boys named Isaiah in your neighborhood, and it’s on your sister-in-law’s shortlist for her new baby, well … I completely understand that it can take some of the shine off a beloved name.

Of course, a Top 100 name can feel relatively uncommon.

Rookie parents don’t always know lots of young children. They think Colton and Peyton and Landon sound fresh and novel, because no one they knew had those names growing up.

Even as a veteran parent, survivor of countless sports teams, summer camps, nursery schools, and, of course, classroom lists, it surprises me how few of these names are represented in our neighborhoods.  I know exactly zero children named Scarlett or Easton, never mind the data.

Still, because a name that cracks the Top 100 tends to attract more attention, they can start to show up everywhere – television characters, sample personalized products in children’s catalogs, and, of course, parents’ shortlists.

On the girls’ side, long-time favorites Alexandra, Alexis, Alyssa and Ashley left the Top 100. A more recent riser, Annabelle, also slipped out of the Top 100. The letter A has dominated the most popular girls’ names in recent years. Could that be changing? Maybe. But A names have plenty of momentum.

In the key of Annabelle, Isabelle also left the Top 100. But Isabella remains a solid Top Ten favorite, so it’s too soon to bid farewell to the group of names.

On the boys’ side, Kayden left the Top 100, but plenty of -aiden names remain in heavy use. Blake, Nathaniel, and Ryder all fell, too, but they’d each declined for two or more years. In other words? Nothing noteworthy in their departure.

On the girls’ side, we welcome to the Top 100 Adeline, Elena, Eliana, Kinsley, Luna, and Willow.

Adeline leapfrogged Adalyn to become the most popular spelling of the name, but there are nine spellings in the current Top 1000.

Speaking of multiple spellings, Elena leads a long list of similar-sounding names. The Spanish, Russian, and Italian form of Helen has climbed steadily since the 1990s.

In both cases, that means the name feels more popular than even a Top 100 ranking implies. 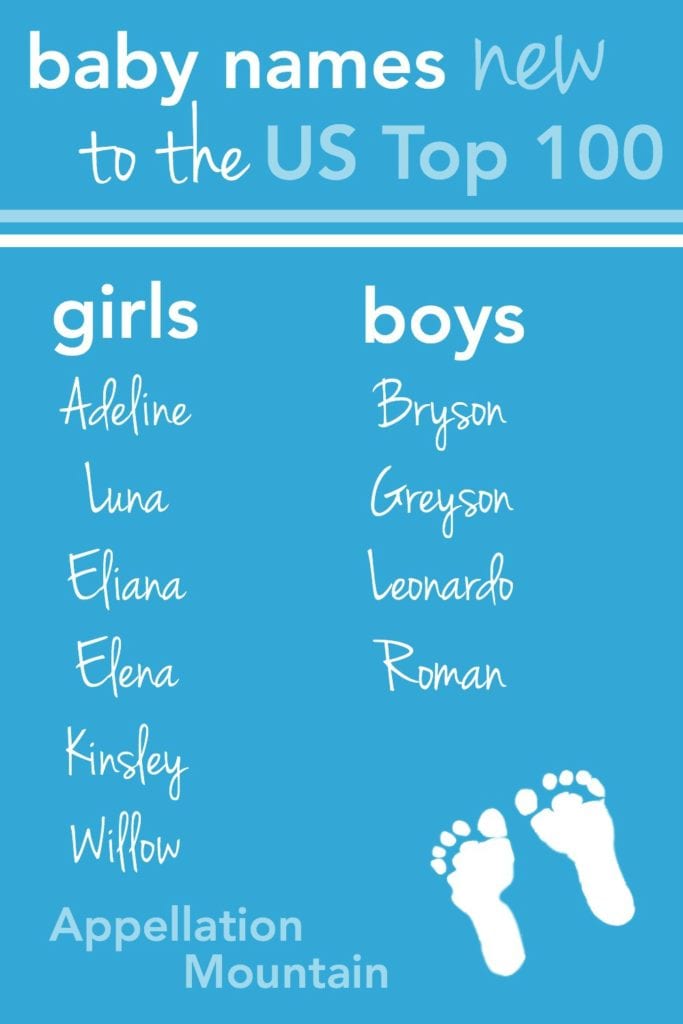 Long and lovely Eliana also comes with multiple spellings. But several names sound quite a bit like Eliana. It’s close to fellow Top 100 arrival Elena, as well as Aaliyah, Liliana, and Liana, to name just a few. Just one sound separates Eliana from Ariana. The name captures the spirit of 2017, but how much higher can a sound-alike climb?

Luna joins nature names like Hazel and Stella near the top of the charts. Willow, too, cracked the Top 100 this year. A subtle distinction between the two? Luna belongs with the vintage gems – the Lily and Violet club, names used a century ago. Willow feels more like today’s Autumn or 1970s favorite Heather – names that caught on recently.

One more fun fact about both new nature names? Both were launched by fictional witches. Luna, of course, comes from a Harry Potter heroine, the quirky Luna Lovegood. Willow started out on the small screen, the whip-smart witch friend and ally of Buffy the Vampire Slayer.

Last up for the girls, we find Kinsley. Kinsley joins a long list of surname names for girls, from Avery to Riley to Kennedy, all Top 100 favorites of today. They’re part of a sorority that stretches back to 1980s Ashley and 1930s Shirley.

Bryson tipped into the Top 100 a few years ago, in 2011 and 2012. It picks up on names like Brandon, Brian, and Brice. If it sounds too modern, consider that it’s also the name of an ancient Greek mathematician, as well as contemporary figures like writer Bill Bryson. What explains the name’s return to the Top 100? I’m not sure, but parents still love two-syllable, ends-with-n surnames and Br- names, too.

Greyson joins the Jackson Club. Jackson, Jaxon, and Jaxson all appear in the current US Top 100. Now so do Greyson and Grayson. The ‘a’ spelling remains more popular for Grayson, but interestingly, Grey ranks in the Top 1000 – while Gray does not. As with Elena and Adeline, fair warning – you know the name is popular, but expect it to feel more popular than you might ever expect.

The next new entry to the Top 100 is Leonardo. Leo entered the Top 100 in 2012; now the upbeat, o-ending boys’ name has brought his big brother into the club. Interestingly, Leo has ranked in the Top 100 before. But Leonardo? This is, far and away, the most popular ranking for elaborate, artistic, Hollywood-dusted Leonardo.

Lastly, Roman also broke into the Top 100. Roman sounds modern, a cousin to two-syllable, ends-in-n picks like Mason, with some place name appeal thrown in. But Roman has a long history of use; it comes from a Late Latin name, and is used in more than half a dozen European languages. For parents after a name that combines modern appeal with deep roots, Roman succeeds.

What do you think of the new Top 100 baby names May 2017? Would you consider using any of these names?