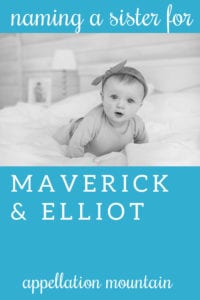 We have two sons: Maverick Jay and Elliot Watt, and we’re expecting our first daughter in March 2021.

Boy names have always came to me so easily, but I‘m struggling to pick out a name for our baby girl.

We don’t like anything very popular or super girly/princess-y.

We prefer to use a family name for the middle name, like our boys, but we’re open to other suggestions as well. Family names include Golden/Goldie, Cary, Rayne, and Norma Jean.

First names we like but haven’t fallen in love with so far: Adrienne, Piper, and Wrenley.

One big obstacle is our last name: L@dy. So, no descriptive words as names, unfortunately.

How exciting to be expecting your first girl!

So often, we look at lists of names and try to pin down our style. Vintage gems, boho chic, traditionals with a twist. You get the idea. But it’s often not that straightforward. I doubt I’d have suggested Elliot as a brother for Maverick, but they do sound right together. And Piper, Adrienne, and Wrenley don’t all neatly fit in the same box, either.

That means you have all the freedom in the world to choose a name you love for your daughter. But it doesn’t make the process of finding a favorite name any easier!

We’re looking for names that are tailored, unusual, and won’t sound like a phrase with your surname.

A SISTER FOR MAVERICK AND ELLIOT

Spare and tailored, Blair has been used in steady numbers for girls for decades. It’s never been wildly popular, though. The -r ending seems perfect with your surname, and I love the possibility of Blair Golden.

There are backstories for Camber, but they’re all a little murky. It’s never really caught on, either, for boys or girls. But it sounds like C+Amber, or maybe a spin on Cameron. If you like Piper, but that’s not quite right, would the much rarer Camber appeal?

I find Colette tailored. Others argue that it’s so French that it still sounds frilly. I like it for lots of reasons – the subtle repeating ‘l’ sound with Colette and your surname seem pleasing. And it’s a name that everyone recognizes, but few people actually share.

I’m not sure if Gwendolyn is quite your style, but the thing about this name? I’m always surprised at how well it works with a diverse and ever-evolving set of sibling names.

Emerson fits with names like Allison and Madison. If your daughter does want something more conventionally girly, Emme makes a sweet nickname. But Emerson in full has a lot of strength.

I know! Juniper violates the no-noun-names rule. And yet, I really like it with your surname. Maybe it’s because I don’t have a strong sense of what a Juniper is. Is that just me?

A logical successor to Madison, which a slightly different sound.

Three-syllable names work so well for your family – it’s no mistake that you’ve landed on Maverick and Elliot. I wonder if Waverly would work for their sister?

Overall, my favorite is Blair Golden. I think it hits the exact note you’re aiming for – not too popular, but still a recognizable name. It picks up on Piper’s -r ending, but is even a little shorter and sparer. Despite being just a single syllable, I think this name packs a big style punch, too.

Readers, over to you! What would you name a sister for Maverick and Elliot?