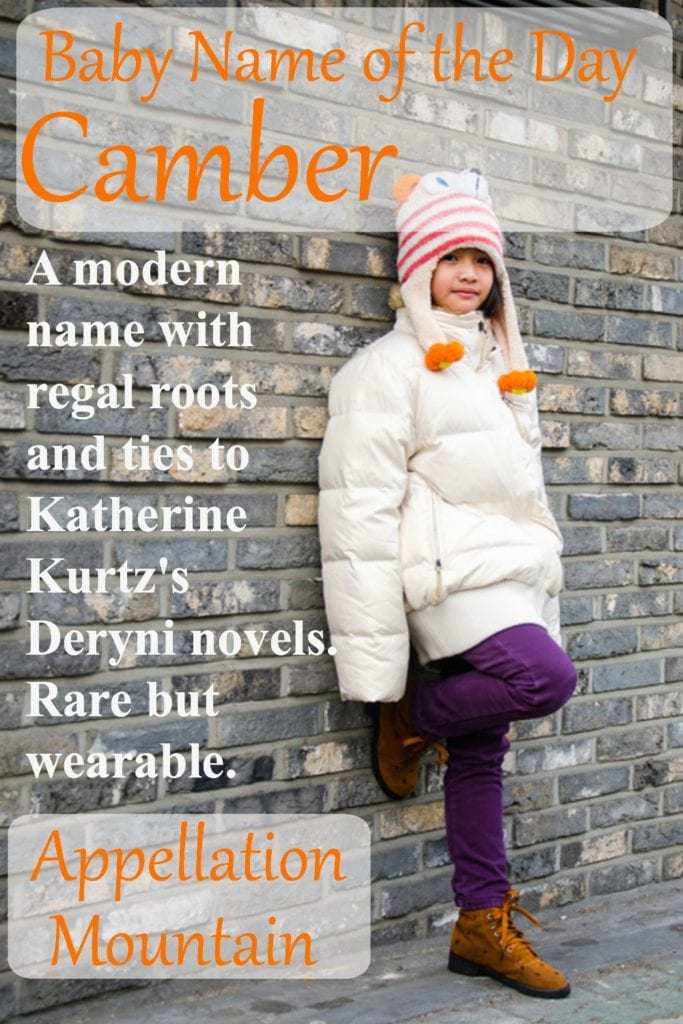 Take Cameron and Amber, mash them together, and the result? The surprisingly appealing Camber.

Thanks to Quiana for suggesting our Baby Name of the Day.

King Camber of Cambria probably belongs in the latter category.

Geoffrey’s story goes like this: the future king was one of three sons of Brutus, descended from Aeneas of Troy. Upon his father’s death, he received Cambria, while his younger brother was given Scotland, and their older brother became ruler of England.

Geoffrey also reports that Cambria, the classical name for Wales, was named for him. It isn’t so. Instead, Cambria comes from Cymry, the name the Welsh gave themselves.

Katherine Kurtz has penned a far-reaching series of historical fantasy novels known as the Deryni series. One of Kurtz’s characters is Camber Kyriell MacRorie, seventh Earl of Culdi.

MacRorie goes from saint to heretic in the course of the novels; he plays a key role in politics. I believe the character first appears in a 1976 novel, but the first Deryni book came a few years earlier.

The novels have been widely read over the decades, meaning that the character’s name must be familiar to many.

The name was first given to more than five girls in 1977. That points to the influence of Kurtz. But why don’t we see boys with the name?

For parents naming children in the mid-1970s, this name just plain sounded like an on-trend pick for girls.

Besides not-history and fiction, there’s another place this name appears. It’s sometimes heard as a surname.

In Old English, camb was another word for comb. It might have referred to actual combs, perhaps an occupational surname for one who made or sold them. Or – more likely – a Camber used combs to prepare wool, similar to a Fuller.

Look this name up in the dictionary, and you’ll find it means bent, ultimately from the Latin camur – hooked. A noun and a verb, it seems to be used mostly in specific fields – an automotive term to describe the tilt of a wheel, a slight arching on the deck of a ship, an aeronautical ratio.

And yet, despite all of these possible origin stories for the name, this name feels more like an invention than anything.

The name first caught my eye on this blog. (She makes me laugh out loud!) The family includes sons Cortlen, Kellen, and Cameron, plus their eldest, daughter Camber. The mom has a PhD in medieval literature, but clearly likes her kids’ names from the twenty-first century.

Plenty of people do, of course. The name is very much on trend in 2016. It feels like a surname name with a unisex vibe, a combination of Camden and Harper, Carter and Camille and Graham.

As of 2015, 24 girls were given the name – that’s not quite a new high. Camber has hovered around the two dozen mark for the last few years. A handful of boys have received the name in recent years, too.

Spelled with a K, Kamber is slightly more popular, also given to 24 girls last year.

If you like your names modern and rare, with just the faintest hint of history about them, this one might be for you.

What do you think of Camber? Do you think it feels like a name with history, or a recent invention?