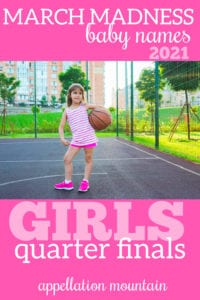 The first round in March Madness Baby Names 2021 is over. Time to look at the girls’ names that advance – and those we have to kiss good-bye.

The opening round is always packed with curiosities. After all, the most popular names at Appellation Mountain don’t look like any other site’s Top Ten. I mean … we have Phryne, not Ava.

But the lists start to seem a little more familiar as we narrow our way up. After all, the names that actually win March Madness tend to be a stylish, but more mainstream, bunch.

So let’s look back at last week’s match-ups. It was a mix of decisive victories and a few closer calls. And I think I have my bet set for which name will win it all …

With nearly 60% of the vote, we clearly favor this short, simple Hebrew name – which isn’t related to Noah at all, except they’re a) both Hebrew and b) pronounced the same – at least in English.

Nature name Cricket has always been a bit of a tough sell. It’s lively, yes – but also, insects. Persephone, on the other hand, is a goddess name that signals the changing seasons. It’s a logical successor to Penelope, so no surprise it garnered nearly 72% of the vote to win decisively.

My guess? Navy will be back, following Ava and Ivy and Scarlett up the popularity charts. But for now, it’s still a relative newcomer compared to well-established feminine favorite Emilia. This was the second biggest blow-out of the Opening Round, with Emilia scooping up over 75% of the vote total.

I mean … they’re almost sister names, right? But thanks to our love of flower names and a Downton Abbey storyline featuring a little Marigold, it’s gained in use recently. Don’t count Faye out – it always gets lots of love when it comes up in conversation! But for now, Marigold’s over 63% reflects the name’s higher profile.

On the other hand, this match-up pitted two very different names against each other. While both names offer stylish sounds – Marlowe’s ending ‘o’ and Vera’s beginning ‘v’ – they represent sharply different styles. And Appellation Mountain readers went for the antique option, handing Vera over 66% of the vote.

An unconventional Susan nickname with a serious Christmas vibe, Zuzu fell hard, handing nearly 84% of the vote to flowery, Southern charm name Magnolia. It’s a mix of factors, but our love of botanicals is definitely among them. After all, Marigold won big, too!

As chance would have it, fictional detective name Phyrne (as in Miss Fisher’s Murder Mysteries) faced off against Enola (as in Holmes, Sherlock’s recently invented little sister). Phryne is a frequent most-read post at Appellation Mountain … because really, where else can you find so much information on this rarity? With over 61% of the vote, Enola advances.

Here’s the big blowout of the Opening Round! Sparky, retro Maisie commanded nearly 83% of the vote versus Laken. In some ways, it’s another Vera-Marlowe match-up, with the more traditional name winning big. But I also think Maisie is a name lots of us are loving right now. And so Maisie goes into the next round as one to watch.

That brings us to the next set of matches. Ready, set, vote!

That’s all for this round! Thank you for voting in March Madness Baby Names 2021.

Voting remains open until Friday, March 19th. Check back on Saturday, March 20th to see how your favorites did – and, of course to vote in the Semi-Final round!