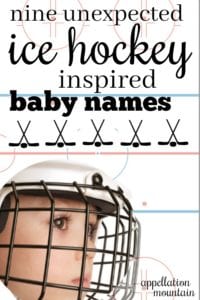 If you’re looking for ice hockey baby names, chances are you’ve considered your favorite players. And they’re a great source of inspiration!

But maybe you’re after something more subtle? Plenty of ice hockey baby names aren’t tied to one player, or even a single club. Instead, they’re straight out of hockey history and legend. Your fellow fans? They’ll get it. But those that aren’t into the sport? They might never know where you found that great baby name.

Technically, Brooks comes from a single ice hockey player. But he’s remembered for something far bigger than his individual performance. Minnesota native Herb Brooks made the 1960 US Olympic team, only to be cut one week before the Games started. Twenty years later, he became the legendary coach of the 1980s men’s US Olympic team. They’re the team of Miracle on Ice fame, a group of unknown college players who defeated the mighty Soviet Union thanks to Brooks’ strategy. Kurt Russell played Brooks in the 2004 movie Miracle. It’s not a name immediately associated with ice hockey, and yet any fan will recognize it – and the talented leader it honors – immediately.

Calder fits right in with Carter and Hunter and so many popular boy names ending with R. But it’s a logical ice hockey pick thanks to Frank Calder. He served as the first ever president of the National Hockey League, from 1917 through 1943. That period spans the Great Depression and two World Wars, and also marks the development of ice hockey as we know it today. Two awards are named in his honor. The Calder Memorial Trophy goes to the rookie of the year; and the Calder Cup is the minor league equivalent of the Stanley Cup. It’s one of my favorite, under-used boy names even if you’re not a hockey fan. But if you are? Then this one is a lock. Canadian Olympic ice hockey player Meaghan Mikkelson gave the name to her son in 2015.

Creighton rhymes with Payton, and yet no spelling of this name has caught on in recent years. It holds a special place in ice hockey baby names, though, thanks to James G.A. Creighton. Born in Halifax around 1850, he was present for the game’s earliest days. In 1872, he moved to Montreal for work, and brought hockey with him. He organized the first-ever indoor ice hockey matched and helped author the rules of the game. He’s often known as the Father of Ice Hockey.

Hattie comes from Harriet, a French feminine form of Henry, which is Germanic – and decidedly unrelated to hockey. But a hat trick is scoring three times in a single game. The term first applied to cricket, but has long been associated with ice hockey. Stories abound explaining why the feat is called a hat trick, but it’s a widely-known term. And Hattie? Well, that’s short for hat trick, of course, as in “nice hattie!” It goes without saying that this is especially appealing for a third child.

If Hurley makes you think of a sport, it’s probably surfing, thanks to the iconic brand founded by surfer-turned-designer Bob Hurley. But it’s a key term in the history of ice hockey, too. The Irish game of hurling – played on a field – was adapted for the ice in Canada. (Of course!) The Irish headmaster of King’s College School in Nova Scotia probably encouraged the new sport. Circa 1800, we find reports of the school boys of King’s College playing “hurley on ice.” It was called shinny back in the day, too – but that doesn’t seem like a given name in the way that Hurley does.

Much like Hurley brings to mind surfing, Kingston also nods to the ocean, since it’s the capital of tropical island Jamaica. But places all over the world have been named Kingston, including one in Ontario, Canada. Many accounts put the first hockey games in this town, about midway between Toronto and Montreal. Except that game? It was played with sticks shipped from Nova Scotia, originally developed for “hurley on ice” and crafted by the local Mi’kmaq artisans. Still, plenty of early hockey games took place in Kingston, and there’s been an organized team there since at least 1897. The current junior ice hockey team, the Kingston Frontenacs, takes their name from their nineteenth century predecessor.

You thought I was going to put Stanley on this list, didn’t you? It makes sense. The Stanley Cup was named for Lord Stanley, appointed Governor General of Canada way back in 1888. In 1889, he observed his first ice hockey game as part of the Montreal Winter Carnival. His sons took up the sport, and he and Lady Stanley became fans, purchasing the silver bowl that became the Stanley Cup, awarded to the NHL champions annually. So of course, you might choose Stanley. But his full title was Lord Stanley of Preston – at least until he succeeded his brother as the 16th Earl of Derby. So Preston works every bit as well.

Often dismissed as an out-there celebrity baby name choice, Pharrell convinced me that Rocket is more of a 21st century virtue name. As the creative powerhouse said, it’s “meant to ascend.” But it makes this list because of Maurice “Rocket” Richard. I know – it is an individual player’s name, so maybe it’s best for Montreal Canadiens fans. But his accomplishments are truly legendary. Richard led his team to a record five consecutive Stanley Cup victories, and a story about his number – #9 – is at the heart of beloved Canadian children’s story, The Hockey Sweater. He’s a Canadian icon, particularly among francophone Canadians. Pronounce his surname the French way: ree SHAR.

Remember when Lord Stanley watched his first hockey game? One of the team was the Montreal Victorias. They took their name from the Victoria Skating Rink, known as the home of the first-ever organized indoor ice hockey match in 1875. The rink, in turn, was named for Queen Victoria, who appointed Lord Stanley. While this classic girl name brings to mind a great many things, there’s a case to consider it among the ice hockey baby names, too!

Then came a 9 year old girl, who cut her hair short, came to the rink dressed to play, and played – most of the season, in fact – before someone realized she wasn’t a boy. She was booted from the team, and her case made it all the way to Ontario Supreme Court. The court ruled against her in 1956. But she’d have the last laugh. By the 1960s, women’s hockey started to catch on – again. That girl’s name? Abby Hoffman. I’m delighted to share my first name with her!

Despite watching lots of ice hockey and visiting the Hall of Fame, I realized I didn’t know all that much about the game’s history. If you’d like to read more, these were some of my favorite finds:

Now let’s hear from you: are there any other ice hockey and baby names fans out there? Would you consider any of the choices on this list? 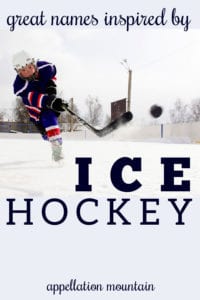 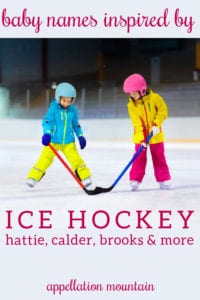