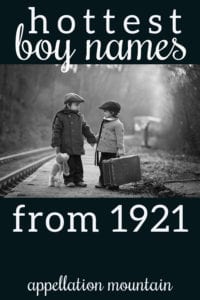 These were some of the hottest 1921 boy names, the names that I would’ve been blogging about back during the Harding administration. Maybe while wearing T-strap heels and a beaded headband.

For our purposes, “hottest” means fastest rising from 1920 to 1921 in terms of popularity rank. It’s an imperfect measure. Name data was less reliable in the early twentieth century. And some of these hottest names would cool off quickly in 1922.

So why look back at vintage baby names?

But it illustrates so many important points.

Trends apply to every style of name. Only two of the Top Ten names in 1921 appear in the current Top Ten: William and James. (For girls, the number of repeats is zero.) Charles and Joseph, Robert and John all remain classic and familiar – but they’re no longer chart-topping go-tos.

Surname names are nothing new. While there are more of them in Top 1000 now than in prior eras, it’s unfair to call them novelties.

Parents have always used daring names. There may be a lot more boys named John in 1921, but there are Porfirios and Fletchers aplenty, too.

These fast-rising favorites are my picks.

Biblical Abner comes with a great meaning: my father is light. It was rising in 1921, but remains overlooked today. But with sincere, homespun style and a long history of use, it’s a great option for parents after something ever-so-slightly different.

Over the years, Cary has (mostly) gone over to the girls. Carey Elwes does an admirable job of reminding us that this name isn’t always short for Caroline. Irish surname Cary was famously worn by Hollywood leading man Cary Grant – born Archibald Leach. In an age of Carson and Carter, why not Cary?

Dante is one of the hottest 1921 boy names that’s actually more popular by today’s standards. We tend to think of the early 1900s as the age of assimilation, where every Giuseppe became a Joe. That happened, of course. But plenty of parents stuck with heritage choices. Perhaps Dante fared so well thanks to the literary connection. Fun fact: writing in the late 1910s and early 1920s, poet TS Eliot regularly quoted Dante.

We tend to think of surname names for boys as twenty-first century novelties. And it’s true that Hunter and Carter and Parker are all enjoying their day in the sun. But they’ve always been part of the naming landscape. Case in point? Preppy, polished Fletcher was bigger in 1921 than it is today.

A strong and compact sound, Ford fits with so many brisk boy names we love right now. But in the 1920s, Clifford appeared in the Top 100. A trendlet of ends-with-ford boy names gave us Crawford, Winford, Wilford, Milford, Alford, Bradford, Stanford, Sanford, Rayford, and even Buford in the Top 1000.

A polished and handsome surname name, Hardy would wear well today. But we’re not choosing it. Instead, Hardy was among the hottest boy names of 1921. It comes from a Middle English word meaning courageous or – well, hardy.

We’re wild for the musical bio all about Alexander Hamilton now, but in 1921, the surname Hamilton was on the up. It’s true that the Founding Father’s legacy remained in the spotlight in the 1920s, but was it really enough to boost the surname name?

But it gets stranger. Hamilton rose in use during 1921. And so did Lafayette! The surname was given steadily into the early twentieth century, inspired by the Marquis de Lafayette. I feel like I’m missing a Game of Thrones-level event for the year 1921 that drove an uptick in Revolutionary-era hero names.

There’s something quite grand about Porfirio. After all, it comes from a Greek name meaning “purple dye,” the color of royalty. It only dipped into the US Top 1000 a few times, but 1921 was one of those years. In fact, with 56 births, 1921 was peak Porfirio. That’s almost certainly down to long-serving Mexican general turned president, Porfirio Diaz. While he died in exile in 1915, his name remained in the headlines.

Santiago, a Spanish name meaning Saint James, is widely used throughout Latin America. But it’s also ranked in the US Top 1000 most years since 1880 … and every year from 1906 onward. The 1921 jump wasn’t exactly the beginning of a march up the popularity charts, but it does point to the long use of other-than-English names in the US.

When it comes to surnames ending with -son, we’ve tended to overlook Watson … even though we’re wild for Sherlock Holmes in multiple forms now. In medieval English, Wat was short for Walter.

What explains the success of Yoshio and Toshio, along with a host of other Japanese names in the early 1920s? Japanese immigration to the US was heavy at the start of the twentieth century. 1921 marks a point where immigrants had lived here long enough to start families, and likely explains the bump in names like Yoshio. Depending on the kanji, the name can mean “righteous man.” That’s a powerfully appealing meaning.

What do you think of these 1921 boy names? Did any of them surprise you? 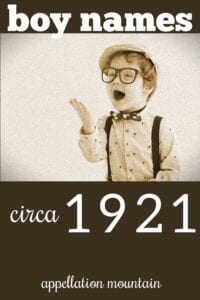