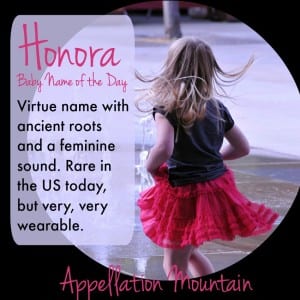 Today’s choice is a virtue name with a decidedly feminine style.

With thanks to Sky for the request, our Baby Name of the Day is Honora.

Honor is a good word. It’s hard to argue with such a virtuous virtue, right?

It comes from the Anglo-French honour, ultimately from the Latin honorem. Noah Webster convinced Americans the drop the u, while the British still prefer honour.

There are lots of different uses of the word: there’s the honor roll, to do the honors, to defend one’s honor, to honor an agreement. But they all generally mean the same thing – dignity, respect, keeping one’s commitment.

Virtue names are in the midst of a renaissance, and parents are embracing plenty of meaningful names, many first used by the Puritans.

No surprise that Honor would find some use as a given name among the Puritans or modern parents, but this story starts back farther than you might guess.

There was a Roman emperor named Honorius from 393 to 423. The general impression is that Honorius was a dud. Among other things, Rome was sacked for the first time in eight centuries on his watch.

But there were also four popes and a handful of saints by the name, and Honorius was a common enough given name that we have a feminine form: Honoria.

In other words, Honora might not be an elaboration of Honor as much as it is a variant of Honoria.

There are also masculine forms, like the French Honoré – the given name of writer Balzac.

Charlotte Yonge was a wildly successful novelist in the nineteenth century. (That’s her in the picture.) From the 1840s through the 1890s, she published dozens of works.

Yonge was a serious name nerd. Her characters wore rarities like Amabel and Lucilla and they answer to nicknames – sometimes more than one.

In 1880, the first year the Social Security Administration collected given name data, Honora ranks in the US Top 1000. Credit to Yonge?

But the name was in the air. Sara and Gerald Murphy were at the center of a glittering Jazz Age set of young, wealthy Americans in Europe. F. Scott Fitzgerald was a dear friend. They had three children, sons Baoth and Patrick, and daughter Honoria, born sometime in the 1920s.

No form of the name has been especially common in recent decades. There have been a few, including:

Honora might be most obscure form of the name, somewhere between the frills-free Honor and Honoria, with her fashionable -ia ending.

In the US in 2013, parents welcomed 133 girls (and 64 boys) named Honor, plus 2o girls called Honora, and fewer than five named Honoria.

Honora could make a great formal name for Nora, or a lovely name on her own. If you’re after a rarity that feels more vintage than modern, Honora is one to consider.

What do you think of Honor/Honora/Honoria? And which form of the name is your favorite?