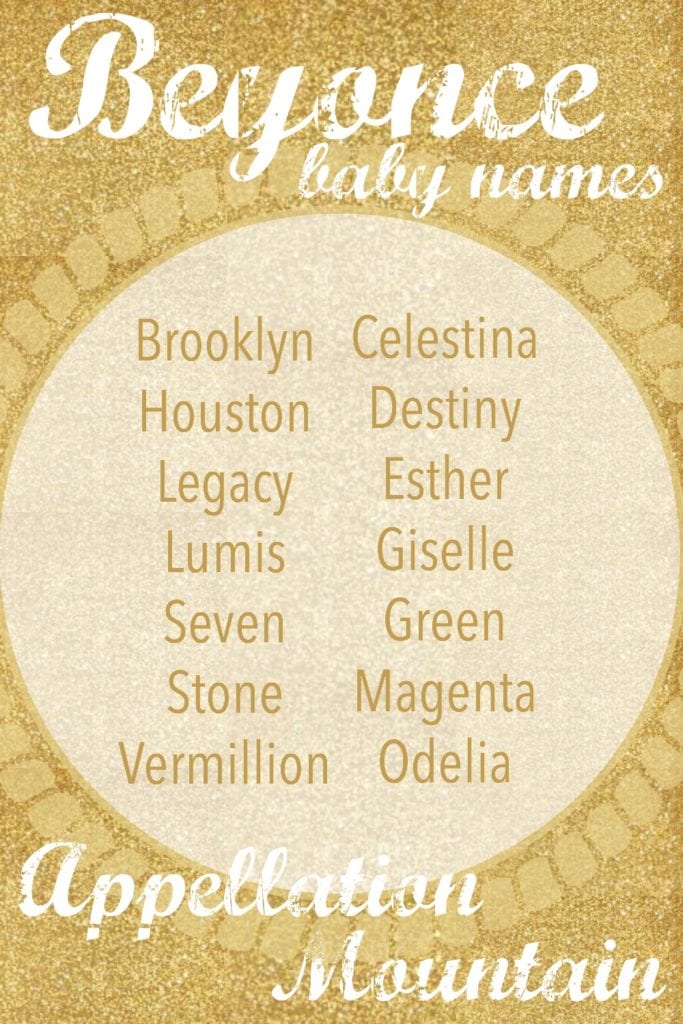 Word is that Bey and Jay welcomed their twins last week. We don’t know the twins’ genders, and the famous couple has yet to reveal their names.

If you’ve been hitting refresh on Beyonce’s Instagram all weekend, here’s a distraction. The amazing Amelia has pulled together a list of researched possibilities.

We know that Blue Ivy’s name is rich with significance. Ivy likely stands for IV, or four in Roman numerals. The couple married on April 4th – 4/4 – and they were both born on the fourth of the month. (She’s September 4th; he’s December 4th.)

Amelia looked at the couples’ family trees, as well as significant moments from their lives.

For more from Amelia, check out her YouTube channel, Amelia EverythingBabyNames.

Brooklyn – Jay Z’s hometown features in much of his music, but would he choose the name for a child? While it’s been wildly popular for girls in recent years – and Jay Z once rapped “If we had a daughter, guess what I’ma call her? Brooklyn Carter.” Today, though, Brooklyn might make a more distinctive choice for a son.

Houston – Beyonce’s hometown makes this list, too. The Texas city takes its name from Sam Houston, a legendary figure in the state. But it’s originally a Scottish place name, meaning “Hugh’s town,” as in twelfth century Anglo-Norman lord Hugh de Padinan. An appealing twist: his descendants, Clan Houston, use the motto In Vicis – In Time.

Lumis – Beyonce’s maternal grandfather was named Lumis. Lumis seems like a true rarity, but likely comes from the Latin lumen – light. That feels like a positive reference for the power couple, and ties in with popular names like Lucy and Luke. (Amelia points out that this would fuel the rumors that Bey and Jay belong to the Illuminati, a world-controlling secret society. She’s even called it out in the lyrics to her song Formation.) But would this make it more or less likely they’d consider a Lu- name?

Seven – The Beckhams chose Harper Seven for their daughter. Could the Carters follow? Amelia added it to this list because of Ivy’s ties to numbers.

Stone – Amelia calls Stone “a tough, cool name” but it makes the list because it appears on at least some versions of Bey’s family tree as a surname.

Vermillion – While I doubt the family will name their kiddos Orange and Puce to continue the color theme, Amelia notes that Beyonce’s maternal grandmother was born in Vermillion, Louisiana.

Celestina – Amelia points out that Beyonce’s mother Tina was born Celestina. It means heavenly – a gorgeous meaning and a beautiful name.

Destiny – Too obvious? Amelia suggests that girl-boy twins named Destiny and Legacy might be stunning together.

Esther – Beyonce’s father, Matthew Knowles, has an Esther on his family tree. Or possibly she was Hester. Like Celestina, it points to the sky, meaning star. The name carries religious significance, too.

Giselle – Beyonce and sister Solange carry French names reflecting their Louisiana Creole heritage. Giselle is Beyonce’s middle, a pretty choice that feels more conventionally feminine than Blue. It brings to mind the famous ballet, as well as the Disney princess in Enchanted.

Green – As with Vermillion, this is no wild guess based on Blue. Instead, Beyonce’s great-grandmother’s maiden name was Green, making it a candidate for Beyonce baby names.

Magenta – Yet another color name possibility.

Your turn: what would you name Beyonce and Jay Z’s twins?