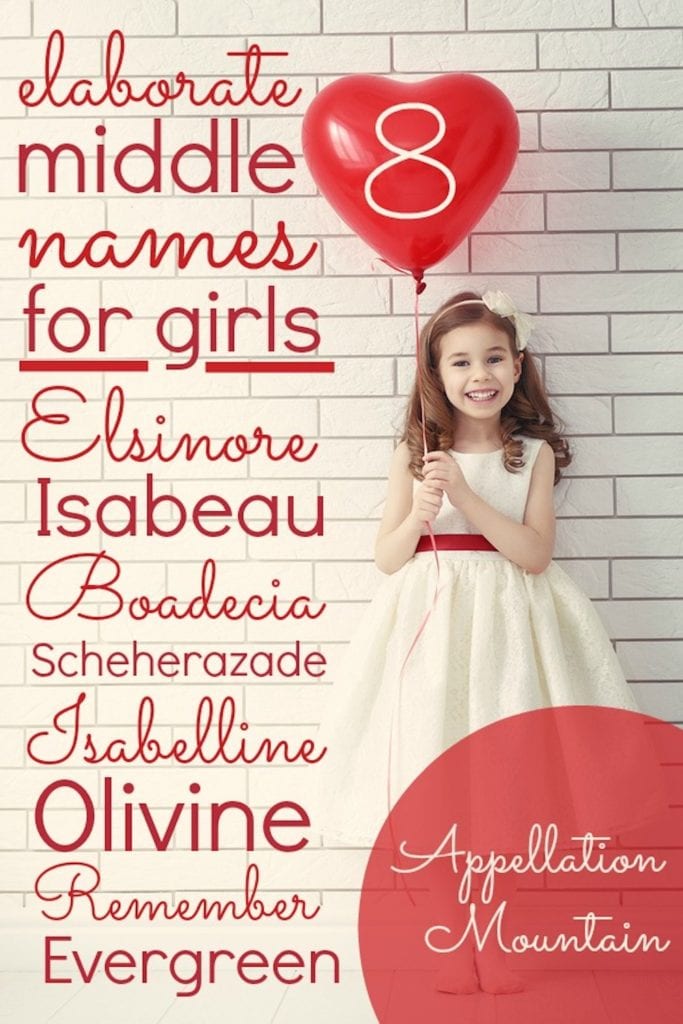 Elaborate middle names can transform a plain first. And yet, they’re slightly harder to dream up, aren’t they?

Elaborate middle names can spark up a mini name, like Mia or Ava. They work well with traditional choices, and mainstream ones, too. But they don’t come to mind as easily.

There are plenty of reasons to go big in the middle spot. If you’re inclined to go big, both in terms of something truly distinctive and the syllable count, these

But for girls, it took some thinking. The names had to come in at three syllables or more. They had to stand out as truly unusual choices. And yet, they had to be reasonably wearable, too.

Elsinore – I’ve heard plenty of women with the middle name Eleanor (or Elinor). But how about Elsinore instead? The literary place name takes us back to tragic Hamlet, and yet it seems intriguing and wearable, too.

Isabeau – Isabeau comes from the same roots as Elizabeth and Isabella. Few of us have ever heard Isabeau, but with Elizabeth such a go-to middle name choice for girls, it feels like a logical substitute.

Boadecia – Confession: I cannot pronounce this name. But Boadecia or Boudica – spellings vary – ruled a British tribe back in the first century. After her husband died, the Romans moved in and wreaked havoc. Then she took control of the kingdom, and led an uprising. It failed, of course, but she remains a fierce historical legend with a super-cool middle.

Scheharezade – Ages ago, a reader suggested that I write about Scheherazade. It inspired this post.

Isabelline – This sounds like it belongs in the first category with Isabeau. The origins of Isabelline are debated, but today it refers to a color. The pale grey-yellow shade is associated with horses and birds, and sometimes other animals. Isabel works just fine as a middle, of course, but Isabelline makes it even grander and less expected.

Olivine – The mineral Olivine takes its name from its olive green color. As with Isabel/Isabelline, you might argue the Olive works every bit as well as Olivine. But if elaborate middle names are your style, it’s hard to beat Olivine.

Remember – Someone asked me to write about Remember years ago, and what can I say? It stuck with me. The downside? This name sounds like a warning as much as a virtue. And yet, it’s an intriguing sound, and certainly implies a story.

Evergreen – At first glance, Evergreen belongs with the nature names. And that’s part of the name’s appeal, no doubt. But to be Evergreen is to be steadfast and loyal; unchanging and true. It’s not a great given name, despite the potential to shorten to Evie. But as a middle? It could make a surprisingly gorgeous option among elaborate middle names.

Okay, I’ve barely scratched the surface! What are your favorite elaborate middle names for girls?