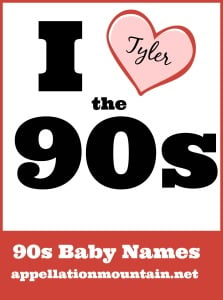 This name is occupational, presidential, and a fast favorite in the 1990s.

I love the 90s week continues with Tyler as our Baby Name of the Day.

Tyler: From Working Man to the White House

No surprise that Tyler is an occupational surname name.  A tyler did exactly what you might imagine.  He made or laid tiles – initially for floors, eventually for roofs.

It’s a common name, and a storied one, too.  Wat Tyler probably made his living tiling roofs, but we remember him for leading the 1381 Peasants’ Revolt in England.  He marched his followers from Canterbury to London in opposition to taxes.  The revolutionary met his death after meeting with King Richard II.

Over the centuries, the name made its way to the new world, and eventually to the White House.  The tenth president of the United States was John Tyler, Jr.  John Sr. had served as governor of Virginia.

Chances are you know someone with the surname, and plenty of notables answer to it.  My first thought?  Aerosmith frontman Steven Tyler and his lovely daughter, actress Liv.

Some families always choose to use surnames as given names, so no surprise that this common last name has found itself in the first spot over the years.

That was the year that Tyrone Power returned from World War II and resumed his movie career.  Power had boosted his Irish given name from obscurity to a fast-rising favorite.  Similar-sounding surname names like Tyson and Tyler tagged along.

Two accomplished men serve as elder statesmen for the name:

Long after Power’s death and well before the success of Florence and Perry, the name continued to rise.  In 1969, there were 493 newborn boys given the name.  A year later, that number jumped to 750.

Between the last and first names, notable Tylers abound.  Place names, too, from Texas – known for its roses – to a county in West Virginia, both named after the tenth president.

What really put Tyler on the map is his style.  The 1990s were all about the rise of surname names, from Madison and Mackenzie to Hunter and Cameron.

Tyler peaked at #5 in the mid-90s, making him part of a very elite fraternity of just 65 names since  the US Social Security Administration starting keeping records in 1880.

With such tremendous popularity has come notoriety.  British personality Katie Hopkins dissed the name on a morning talk show over the summer of 2013.  She then went on to publish her own book of acceptable baby names.  (Which, nope – haven’t read and I won’t be reading.)

And, of course, parents have moved on to other surname names and ends-in-r names for boys since the 1990s.

Even if you’ve never met a Tyler, chances are you can think of one – real or fictional.  The Vampire Diaries includes werewolf/football player Tyler Lockwood.  And Jesse Tyler Ferguson is part of Modern Family’s celebrated ensemble cast.

Overall, Tyler feels like exactly what he is: a name once wildly fashionable, and now rather predictable for boys born in a certain era.  It’s falling steadily, down to #63 in 2013.

And yet, someday – about the same time that our great-grandchildren are embracing Madison and Carter anew, Tyler will feel fresh again.