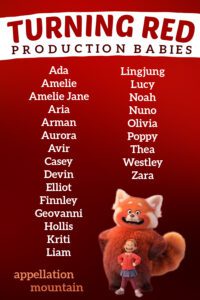 Ever since Toy Story debuted in 1995, Pixar Studios has included a list of production babies at the end of their credits. They’re the children of the cast and crew born during the film’s development and creation.

After all, any film can take years to go from concept to red carpet debut. But Pixar movies involve months and months of animation, along with voice actors, to bring to life.

It’s easy to imagine that you might start working on a film before you ever imagined adding to your family … and have a baby in your arms before it premieres. That journey is immortalized in the credits, with the production babies lists.

It’s not clear exactly when the clock starts on official production babies. But Turning Red was officially announced in December 2020 – at least three years after writer, director, and producer Domee Shi pitched the concept to the studio.

But every Pixar flick has had them since Day One. Pixar is, of course, now part of Disney, and so Disney Animation Studios movies also have the lists, as do lots of animated films. After all, it’s a small industry and a highly visible tradition.

NAMES FROM THE MOVIE

It’s worth noting that the movie characters can also prove influential. Mei and Meilin, the main character’s nickname and name, could catch on. Or maybe we’ll see a more subtle influence – Maelynne, maybe?

Singer and songwriter Finneas voiced 4*Town member Jesse in the movie, and worked on the soundtrack, along with his sister, Billie Eilish. It’s possible we’ll see more boys named Finneas in the future as a result. It’s a phonetic take on the Biblical Phineas – or even Phinehas – which is maybe a less intuitive way to get to Finn.

Mei’s classmates and best friends are Abby, Miriam, and Priya. Miriam feels ready for revival, and Priya seems like it could catch on, too. I’m also curious about Domee – as in director Domee Shi – and Robaire, another 4*Town member, which seems like a phonetic spelling of the French pronunciation of Robert.

SO HOW MANY BABIES?

But back to the Turning Red production babies.

The list varies from film to film. Raya and the Last Dragon came in at 42 names. At 22, Soul’s list was even briefer. The 30 births announced in the Encanto end credits seems a bit more typical.

Just like anywhere else, the Pixar staff love the most popular of choices. On the boys’ side, Top Ten favorites Liam, and Noah are both represented.

And on the girls’ side, there’s Top Ten Olivia, plus fast favorites Aurora, Aria, and Lucy.

But people who make movies often choose names that are on the upswing. In this case, that means Ada, Zara, Thea, and Poppy for the girls’ list.

The numbers tell us that Elliot is probably a stylish choice for a son. But it might also be a unisex pick, bestowed on a daughter.

The same is true for Hollis – not currently ranked in the US Top 1000, but very on-trend. It’s an s-ending surname with a nod to the natural world and it works equally well across gender lines.

A spelling twist can make a name confusing – or more memorable. These three from the Turning Red production babies list are the latter: Finnley, Geovanni, and Westley.

The Pixar team spans the world, and the creative talent they employ is diverse. No surprise that the names they choose reflect such international roots.

Avir probably comes from Hebrew, but more than one meaning is possible.

The Indian name Kriti might mean “a work of art” – which feels just right for the daughter of anyone at Pixar.

The Chinese double name Lingjun changes meaning based on the characters chosen to write it.

And then there’s Nuno. It’s Portuguese. Saint Nuno was a medieval saint and a general who held off the invading Castilian army – keeping his country independent. Nuno could mean ninth, and it’s also an o-ending name that fits in with so many similar choices for our sons.

There’s an Amelie and an Amelie Jane. It’s not clear if the Jane was added to distinguish the two girls. After all, names do sometimes repeat on production babies lists.

Casey feels almost retro, even though it peaked in the 1980s. Logic says it’s too soon for the name to make a comeback – and the numbers suggest it’s still falling. But there’s something breezy and casual about Casey, a name that feels surprisingly fresh in the 2020s.

Devin, too, was a white-hot name from an earlier decade. Though in this case, that’s the 1990s and early 2000s. Still, we forget that popular names often stay in use for years after they peak, and that’s certainly the case with Devin.

That’s it for the Turning Red production babies. Do you have any favorites from this list?