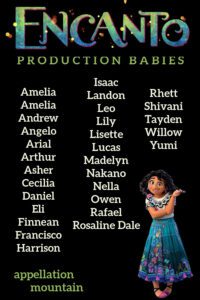 Curious about the Encanto production babies?

This list includes the 30 babies celebrated in the sixtieth animated movie from Disney, released in 2021.

What, exactly, are production babies? The concept is pretty simple. Live action movies are filmed over a few months. And while there’s pre- and post-production, generally a movie takes around a year to reach theaters.

That means that employees working on any given film often grow their families as they’re working on the project.

Pixar started the tradition with the very first Toy Story movie back in 1995. Name fans have been watching for production babies list just as long. Other animation studios – including Disney, which now owns Pixar – now follow the custom, too.

Movie-making and animation are creative endeavors, with global reach. No surprise, then, that the names reflect a wide range of styles.

And sometimes, it even seems like the style and spirit of the movie itself might’ve influenced parents’ choices.

Let’s look at all of the Encanto production babies!

That’s not a typo – Amelia appears twice, a name both traditional and near peak popularity right about now. Another stylish/classic girl’s name, Cecilia, also appears on the list of Encanto production babies.

Old Testament boy names, like Asher, Eli, and Isaac could fit into the Classics category just as easily. But since they’re all current Top 100 picks, they seem to fit here. So do surname names Harrison and Landon, fierce Leo, and upbeat Owen.

Of course, Madelyn could be a classic, but this spelling feels more like a current choice. Nature names Lily and Willow are having a moment, though the former is vintage and the latter, pure twenty-first century.

Spanish and Italian names like Angelo, Rafael, and Francisco are right at home in the US. They’re also perfect fits for children born during the making of Encanto, a name celebrating life in Colombia. (Though that’s likely a happy coincidence.)

Worth noting: Francisco might be Lin-Manuel Miranda’s younger son. Francisco was born in February 2018. Miranda first spoke about the project as early as 2016, and he and several others traveled to Colombia during 2018. (Though the movie’s title wouldn’t be revealed for another two years.)

Masculine Nakano comes from Japan, as does feminine Yumi.

Goddess name Shivani is a girl’s name with roots in Hinduism.

Then there’s, Tayden, easily among the least common of the Aiden names.

Arial takes under-the-sea Ariel and uses the spelling of a standard font. Given the popularity of Ariel, the – ial spelling is seen, too, but it’s pretty rare.

We all love a good Finn- name. Finnean fits with obscure, but sometimes-heard names like Finnian and Finan.

Lisette, a French diminutive from Elizabeth, is all kinds of charming and delightful.

And Rosaline Dale sounds a little like a Southern double name, a surprising combination that sounds like a silent movie star from an earlier age, more than a 2021 production baby name.

Any favorites from the Encanto production babies? 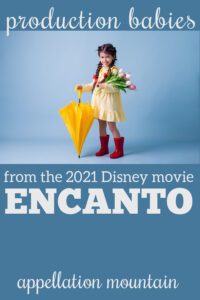