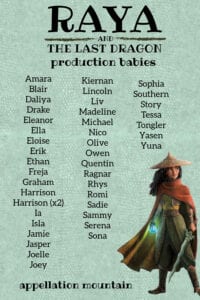 Looking for the Raya and the Last Dragon production babies? This list includes all 42 babies celebrated in the closing credits of Disney’s animated movie.

If you’re new to the concept, it’s pretty simple. It takes months – sometimes years – to create an animated movie of such complexity. That means that employees working on the film welcome plenty of children during the process.

Pixar started the tradition with the very first Toy Story movie back in 1995. And name fans? We’ve been watching for them just as long. Other animation studios – including Disney, which now owns Pixar – have gotten into the act, too.

Given the creative nature – and global reach – of movie-making and animation, it’s no surprise that the names reflect a wide range of styles.

And yet, sometimes the lists do seem to reflect – at least a little – the cultures and storylines of the movies. That tracks, I think … and it makes production babies even more fun to review.

Let’s explore all of the Raya and the Last Dragon production babies!

THE COMPLETE LIST: RAYA AND THE LAST DRAGON PRODUCTION BABIES

Every list of production babies names always includes a few classics, and Raya is no exception. This time, it’s Sophia, Eleanor, and Madeline for the girls, plus Michael for the boys.

The line between classics and current favorites is always pretty fuzzy. After all, Sophia fits in both categories. But lots of names are clearly the type that we expect to hear for babies in the 2020s, no matter where their names are listed.

For Raya and the Last Dragon production babies, boy names like Ethan, Jasper, Owen, Lincoln, and Quentin fit. And Harrison? The names sits just beyond the US Top 100 as of 2020, but it tops this list, with two births.

Girl names in this category include Ella, Eloise, Isla, Olive, and Tessa.

There’s also sweet, vintage Sadie … which also could fall under the next heading.

This next group might count as current favorites, but they seem a little different. Blair, Nico, Story, and Romi sound like specifically 21st century kids, the incoming preschool class in a particularly stylish neighborhood.

They’re not quite Cole and Jack, but three names – Drake, Graham, and Rhys – fit right in with so many brief, brisk boy names that are so popular in recent years.

Raya is a movie set in Kumandra – a fictional place, but one clearly inspired by many countries in Southeast Asia. (The producer mentioned research trips to Singapore, Cambodia, Laos, Thailand, the Philippines, and more.

But there’s an interesting cluster of names from Scandinavia, too. Erik might be a fluke. And Liv is rising in use across the US. But Freja and Ragnar seem straight out of the far north.

Another set of names are notable for their global vibe – though pinning down exactly which part of the globe they reference is a challenge. That might even be part of their charm, that ability to span multiple heritages.

Amara is a favorite with American parents, and it could be Igbo, Japanese, or Thai. Sanskrit roots are possible. And the case can be made for Latin, too.

Daliya is equally intriguing. It might be Chinese. But similar names exist in Hebrew and Arabic, and are heard across many languages.

At just two letters, Ia still offers multiple origins and meaning. It could be a cousin to the Greek word for violet, but a masculine nickname used in Georgian, or Japanese … or Cornish.

Yuna is every bit as international, plus there’s a Final Fantasy X character whose name comes straight out of the video game’s mythology.

And then there’s Sona, which might mean gold in Hindi, or, again, could have alternate origins and meanings.

A sprinkling of names always feel a little outside of trends.

Serena borders on the timeless, but isn’t quite a virtue name.

Joelle rocketed into use in the late 1960s, but has remained on the fringes ever since.

Actor Kiernan Shipka – lately of Mad Men and The Chilling Adventures of Sabrina – might inspire the use of the Irish surname name.

Southern, too, might be a surname, or a nod to roots in the American – or any other – south.

And then there’s Yasen, either a Bulgarian nature name, a twist on Jason … or some other mystery yet to be unraveled.

But this is the best of the production baby stories, possibly ever.

It’s not a real baby name at all. It’s an Easter egg tucked into the Raya and the Last Dragon production babies list!

Easter eggs are references tucked into the movie. Often they’re shout-outs to earlier films in a series or from the same studio. (Remember when Rapunzel and Flynn Ryder made a cameo in Frozen?) And some are just for fun, like the the Peabody and Sherman reference in Back to the Future.

So what’s happening in Raya?

Actor Benedict Wong voices a character called Tong. He talks about his family – a wife and child. The child doesn’t have a name. But the animators called the tyke Tongler.

I mean … it doesn’t get any better than that, does it?

Any favorites from this list of Raya and the Last Dragon production babies? 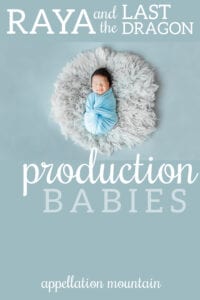 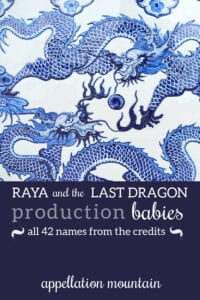