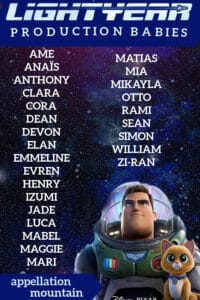 Wait, what are Production Babies?

Ever since the very first Pixar movie, Toy Story, debuted in 1995, the studio has followed a fascinating tradition.

They’ve listed the names of any babies born to the staff responsible for the movie in that film’s credits.

They’re at the very end, and they’re called Production Babies. Because, well, they arrived during the movie’s production.

It makes sense, right? Animated movies take a long time – sometimes years – to go from early concept to finished product. If you welcome a new child during that time, well, inevitably you’ll think of Monsters, Inc. or Luca as you reflect on your child’s early days.

As of 2006, Pixar Animation Studios officially became part of Walt Disney Studios in 2006. They now follow the custom, as do several other animation houses.

Released in 2022, Lightyear marks the studio’s 26th feature film. Lists vary in length, but well over 600 births have been celebrated this way.

The lists give no indication of gender, date – or even year – of birth, or the parent’s role on the film. A handful of lists have noted twins. Occasionally, if two Production Babies share a first name, the initial of their surname (presumably) is also included.

It’s first names only, and we don’t know if parents are asked how to credit their children. (Though presumably that’s the case, right?) So Lightyear’s Maggie might be Margaret – or something else entirely. We just don’t know.

But that really doesn’t take away from the excitement.

So how many babies are credited in the Lightyear Production Babies list?

Though actually, they’re listed as Future Space Rangers this time around.

MORE ABOUT THE NAMES

Every list includes a handful of solid, traditional choices. Lightyear is no exception. On the boys’ side, there’s Anthony, Henry, and William. Maggie, for the girls, also feels like a traditional option.

Then there are names that feel traditional, but are in greater use today than before.

For boys, that includes Simon and Dean.

Clara and Cora fit this category for girls.

I’d put Jade on this list, too. While it’s something of a twentieth-century sensation, it feels like it’s transitioned from the new kid on the block to a semi-traditional favorite.

NAMES WE ALL KNOW

It’s no surprise to see Top Ten Mia on this list – or any list, really. Mikayla, too, is part of a trend that’s still present.

Pixar’s international talent pool means that we hear names from everywhere on the globe.

Some movies have a specific setting or backstory that seems to inform name choices. (Maybe because more, say, musicians or artists with a Colombian background worked on Encanto … just enough to put names like Rafael, Francisco, and Angelo on the list. Or maybe it’s just a happy coincidence.)

Lightyear is set in space, so there’s no specific heritage influence. But the team that makes the movies possible often chooses names that reflect the diverse backgrounds of Pixar personnel.

For Lightyear production babies, that includes the French Anaïs.

Matias comes from Spanish or Portuguese, though increasingly, it’s just a next gen evolution of Matthew and Mateo.

So does Mari, assuming it’s Basque. But it could also come from Japanese, or be a Maria/Marie nickname used across Europe.

Rami, too, claims an international pedigree, ranging from Arabic to Japanese to Hebrew to Sanskrit.

As with the international names, Ame’s potential origins might be Hawaiian or French or Japanese. But it could also be an invented mini name.

Elan, too, has roots as a word name referring to vivaciousness. But it also ties to medieval and mythological Irish and Welsh names, to name just two.

While Zi-Ran looks like the name of a Buzz Lightyear nemesis, it’s probably a Chinese nature name.

No list of Pixar production babies could be complete without some vintage gems.

In this case, Future Space Rangers answer to the throwback names Emmeline, Mabel, and Otto.

THE MOST PIXAR NAMES

Early days, production babies’ names felt like interesting lists – ones that reflected the tremendous range and creativity of the movie studio staff.

But with so much history, it’s interesting to spot the names on every list that seem the most Pixar of them all.

And sure enough, Lightyear includes a Luca. Since the movie came out in 2021, it’s easy to imagine that Luca’s parent(s) might’ve worked on that movie, too. Or simply been inspired the by the tale.

Either way, it’s a name with deep roots in the studio’s history, and a thoroughly Pixar name.

What are your favorite Lightyear Production Babies names? 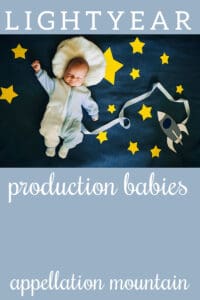