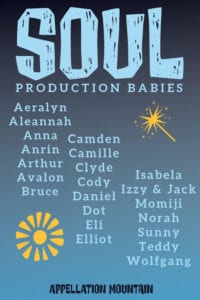 Looking for Soul production babies? Here’s the list of 22 children born to Disney-Pixar families while working on the film.

If you’re new to the concept, it’s pretty simple. It takes months – sometimes years – to create an animated movie of such complexity. That means that lots and lots of children arrive during the process.

Ever since the very first Toy Story movie, the team at Pixar has acknowledged these new arrivals at the very end of the closing credits. And name fans? We’ve been watching for them just as long. Since that first movie debuted in 1995, other animation studios – including Disney, which now owns Pixar – have gotten into the act, too.

And with the rise of Disney+, they’re easier than ever to spot. (Three cheers for the pause button!) But even if you’ve already read them, it’s always worth a closer look.

When you’re watching the ending credits to Soul, they’re called “Recent You Seminar Graduates.” I’ll keep this spoiler-free, but it’s a sweet reference to a central plot point.

On to the names!

Classic names feature in nearly every production babies list, and Soul is no exception. There’s Anna for the girls, plus Daniel for the boys.

Camille and Arthur feel like they belong here, too, though they’re classics with a fashionable vibe.

And where does Jack go? It straddles this category and cozy minimalists, too.

Names like Camden, Elliot, and Norah belong with current favorites. They’re not exactly classic, but they’ve been around plenty. Call them mainstream favorites – great names that you’d hear nearly anywhere in the US, including in the credits of a Pixar film.

And while Cody’s heyday was the 1990s, it still feels like it belongs in this category.

Aeralyn and Aleannah feel very much like 2021 choices. They represent re-spellings or slight twists on familiar favorites, the kind of names that are everywhere – but tough to pin down because the individual spellings feel almost unique.

Speaking of Dot, a few of these names feel like retro revivals – names that aren’t quite back, but could be just about ready for revival. Clyde and Bruce are more likely to be grandpas than baby boys – but that is ever-changing.

Given the global talent pool Pixar draws to their work, it’s no surprise that production babies almost always include some surprising imports, too. Japanese name Momiji refers to autumn.

Isabela might be a variant spelling chosen by English-speaking parents, or it could be a spelling representing the parents’ native language. (The single-L spelling is popular in Portugal, though Isabella and Isabel now outrank Isabela.)

Likewise, Wolfgang might be a daring choice for American parents, inspired by German heritage. Or it could be a German parent’s choice – though Wolfgang’s heyday was the 1950s. (But if Bruce can make a comeback …)

Avalon is the kind of name that feels poised for success – the sound, the associations. But it remains surprisingly rare – for now.

Anrin is a total surprise. Some names sound a little like Anrin, but an exact meaning or origin remains elusive. It may simply be another creative invention by a team with seemingly infinite imagination.

Readers, do you have any favorites from the Soul production babies names? 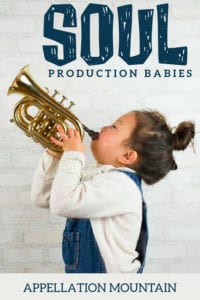 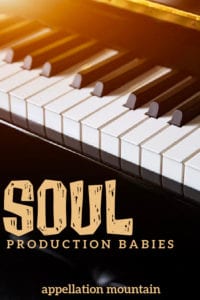