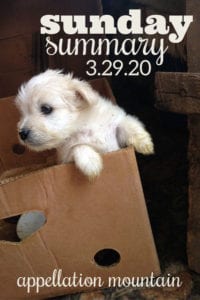 If you’re reading this in real time, there’s a pretty good chance that your life is Not Normal.

Even if you and yours are healthy and well, my guess is that anxiety is tough to keep at bay.

So today’s Sunday Summary is as fluffy as a puppy in the cardboard box. If you’re in need of a distraction or five, this list delivers.

Have you played this bracket from Namerology? It’s addictive. The US version is do-able, but when I click over into the British one? So hard. (British readers, guessing it’s the opposite for you!)

Living with Kids from Design Mom inspires me to spruce up our house … and also sends me on a treasure hunt for cool, creative sibsets every week. This week’s family includes four kiddos: Autumn, Wilder, Archer, and Sawyer. Back in 2015, I rounded up some of my favorites. Maybe it’s time for a second edition!

I am now obsessed with baby porcupines, which are called – for real! – porcupettes. That’s because a porcupine named Peri just gave birth to a baby girl porcupette at Disney’s Animal Kingdom. Adorable video here. No name has been released for the new arrival yet. I’m suggesting Primrose, Promise, or one of the other names on this list. What P names would you suggest?

The 2019 Scottish baby name data is out, including some unique choices. Welcome to the world, Harbour-Hay, Atlantis, Dicaprio, and Braxx, to name just a few. (The link goes to a news article listing some of the distinctive choices; you can review the full data set here.) Oh, and Jack and Olivia were the #1 choices.

And for a little bit of quiet controversy: was this mom wrong? I say that her husband was unreasonable. But it’s interesting to think about – what would you do if your partner was rock-solid set on a name that you just couldn’t bring yourself to use as a first? And you were doing your best to compromise, but your partner just wouldn’t budge? I see this sometimes, and it feels like there’s no good resolution.

Oh, and one last distraction: don’t forget to vote in the March Madness Baby Names! We’re down to the very last match.

The girls’ contest is here, and the boys’ contest can be found here. Voting is only open through tomorrow, March 30th. (Which is Monday. Yeah. I totally had to look at a calendar to figure that out. Yikes!)

Sending love to each and every one of you. Stay safe and well and sane! 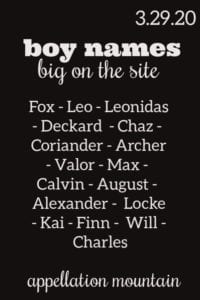 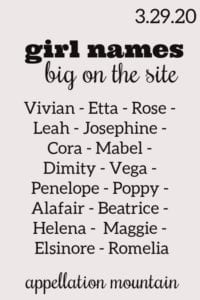 Image by Ledja Gjata from Pixabay