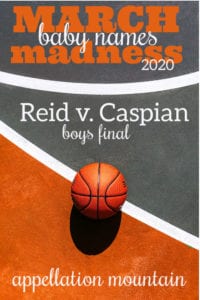 We’ve reached that moment in March Madness baby names – the one where I’m absolutely shocked, shocked by the outcome of a particular contest.

If you’re new here, here’s what’s up: every March, I take the most popular baby names on Appellation Mountain and set them into a bracket-style competition. Your votes determine the champion, every step of the way.

The most popular names on this site lean quirky. (No, really quirky. The #1 boy name for 2019 was Cove. Only here!) But voting tends to bring out the more mainstream favorites.

Need proof? Just look at the winners since the very first year of competition:

*After Cora’s back-to-back victories, we decided that once a name won the top prize, it was disqualified from future competitions.

So how did the SemiFinals shake out?

In the first contest, Reid handily defeated Archie with over 58% of the vote. I’m a little surprised, if only because Archie has been so popular lately. It’s partly the Meghan and Harry effect, but also the borrowed-from-Britain vibe. Not every name big in the UK catches on in the US – or vice versa. But names like Hugo, Oliver, and yes, Archie caught on there before they started to rise here.

That said Reid feels like a modern traditional – a rock-solid boy name that we’re used to considering for our sons. And as March Madness baby names progresses, we tend to default to the more traditional choices. So I’m not terribly surprised that Reid came out on top.

But the second match-up? Whoa! Caspian sailed away with 54% of the vote over Hayes. Remember all the reasons that I’m not surprised Reid came out on top? Yeah. Those are the same reasons I was (mostly) expecting the contest to come down to Reid versus Hayes.

Instead, Caspian carried the day! It’s elaborate and romantic, a place name and a literary one. It’s a fairytale prince name, but lately it’s gaining in use for our children, too.

And so while I fully expect Hayes to rise dramatically on the US popularity charts over the next few years, it’s Caspian that claims the victory today.