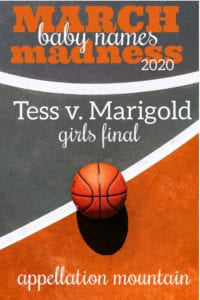 As with the boys’ contest, I’m pretty surprised by the results. I might’ve predicted the exact opposite outcome!

And once again, the name that I thought might just win it all? Nope. Maybe in 2021 …

If you’re new here, this is what you need to know: every year, I take the most popular names at Appellation Mountain and turn them into a bracket-style competition. “Most popular” looks a little different around here. In the US, Emma and Liam currently sit at the top of the charts. For Appellation Mountain? In 2019, that title belonged to Maisie and Cove.

But while the names competing in March Madness tend to be idiosyncratic, the ones that ultimately win feel far more mainstream.

Here’s the list of past winners, ever since we started this contest (on a whim) back in 2011:

So out-there picks like Zuzu and Andromeda make the opening round, year after year … but the force of voting inevitably brings us towards the middle.

Which brings us, of course, to the results from last week’s SemiFinals.

Marigold defeated Esme with 62% of the vote. This one surprised me. Marigold has attracted lots of attention lately. But then … so did Esme not that long ago. If you’d asked me, I might’ve called Marigold a new Esme – a name just a little bit different, but with potential to catch on. In fact, Esme is one of those bridesmaid names – it always makes it into March Madness, but has yet to take home a title. And it won’t be this year, either …

Then again, there are plenty of reasons to love Marigold. We’re all about bold flower names. And no question that Marigold’s appearance on Downton Abbey made lots of us sit up and take notice.

In a much closer contest, Tess triumphed over Emmeline, with 53% of the total. I think Tess has loads of appeal … but I’m a little surprise Emmeline made it this far. Maybe it’s because Emmeline snuck in as the sixteenth seed and just barely squeaked by #1 name Maisie? But hey, as they say in sports … that’s why we play the game.

A note on Tess: I was surprised to see that I’d written about both Tessa and Tess over the years, but somehow it’s the post on Tess that was more popular. That seems quirky – even by Appellation Mountain standards. But I’m guessing that many Tess fans would actually use Tessa, or even Teresa/Theresa/Therese on a daughter’s birth certificate? At least, I’ve yet to meet a girl named just Tess, even though a number who are called Tess. (Or something similar.)

All of this brings us to our final match-up. The winner, of course, is up to you.