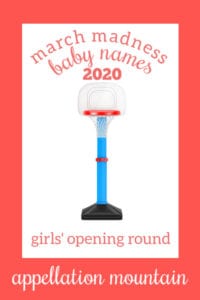 It’s the first Saturday in March, and that means …

Since way back in 2011, we’ve played this game annually. I pull the most popular baby name posts from the prior calendar year. And since this is Appellation Mountain, we’re not talking Liam and Emma. Nope, this is a quirky bunch of names. Some are up-and-comers on real world popularity charts. Others reflect pop culture and curiosities that could only be a big deal in this marvelous little corner of cyberspace.

Still, the names that win tend to be a fashionable – and mainstream – bunch:

This rule means that I had to count higher than sixteen to get to the most popular girl names on the site. You can read the full rundown here.

Or just read on, and get ready to vote for your favorites!

A possible replacement for Sadie faces a potential successor to Emma.

Sleek and modern Marlowe or simple and traditional Tess?

A pair of long and lovely names face off: botanical Marigold or mythological Persephone?

The V showdown pits an invented name from 10,000 BC – the movie – against meaning-rich, vintage Vera.

Voting remains open through Thursday, March 12th. Check back on Saturday, March 14th to see if your favorites win, and, of course, to vote in the next round!