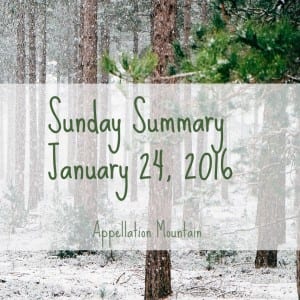 Hello, we have snow! After a winter that’s felt more like an extended autumn, something like two feet of snow dropped in a mere 24 hours. I am beyond grateful that we’re all safe and warm, and that my husband likes going outside in the snow. (He’s from Michigan, and can speak with authority on what makes a good snow shovel.)

The winter storm responsible for all this loveliness that’s soon to be slushiness is semi-officially called Jonas. Storm names haven’t really caught on in DC, but then, the practice is pretty new. Still, it had me curious about the process of choosing the names, and I found this explanation on The Weather Channel. Turns out that the 2015-2016 list was submitted by Bozeman High School’s Latin class, which explains the classical bent of the names (Ajax, Hera), as well as the nods to pop culture (Yolo, and, yes, Jonas.)

That’s all for this week! As always, have a great week – and thank you so very much for reading!