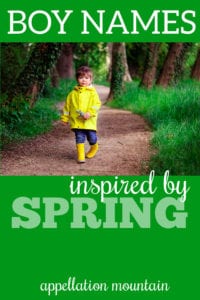 Spring boy names blend the energy of the season with our love of the natural world. From Top 100 favorites to true rarities, these choices all feel like they’re ready for a new season of growth and adventure.

While a few of these are instantly connected to spring – Peter and Pascal, especially – others take a more subtle approach.

But if you’re expecting a son during this season, spring boy names might be inspired possibilities for a first or a middle name.

The first man in the Book of Genesis, Adam means earth. And while it’s a classic choice with a long history of use, something about that meaning also suggests new beginnings – just right for a spring-inspired name for a son. (Full disclosure: Adam appears on the Autumn Boy Names list, too!)

If you’re into astrology, you might know that Aries is the first sign of the Zodiac, coinciding with the first day of spring. While it sounds airy, Aries is a fire-sign, symbolized by the ram. So that feels like a strong, assertive choice, ready to take on the world.

A tree name in the key of Rowan, Birch brings to mind spring because several species of the tree flower early in the season. Birch branches are associated with Easter in Scandinavia, reinforcing the connection.

Like rivers, brooks are always present. But as winter snow melts, babbling brooks often become familiar sounds during the spring.

A Spanish surname, Cordero originally referred to a young lamb. This might’ve been used by a shepherd, but today it seems like an intriguing option among spring boy names.

Another word for a fountain or well is spring. And while it’s not quite talking about the season, the symbolism seems close. Dathan means fountain in Hebrew. While Dathan is an Old Testament villain, it’s such an attractive name that parents might not mind the association.

A Colorado place name, Denver comes from politician James W. Denver. It appears on lots of spring boy names list. It might mean “green valley” – which seems quite seasonally appropriate – though other sites suggest it refers to Dane – as in Denmark – and crossing or ford, as in a shallow place to wade across a river. The latter isn’t quite as spring-like, but it still works.

Because March comes in like a lion, even if the constellation Leo is most associated with the summer months.

An active verb, but also the first month of spring. The name comes from the Roman god Mars.

Like March, Marcus comes from the god Mars – and that connects back to the first month of the season.

A Top 100 favorite, upbeat and traditional Owen might come from the Welsh word oen – lamb.

The Egyptian god is associated with the spring equinox, which puts it on this list.

Palmer might seem like a stretch, but Palm Sunday is, of course, the Sunday before Easter and the beginning of Holy Week for Christians. As a surname, Palmer was originally given to Christians who had been on pilgrimage, bringing back palm branches as souvenirs.

In Latin, Easter is Pascha, originally from Passover. It’s sometimes a surname, but a form of Pascal occurs in nearly every European language. Pascal is French, German, and Dutch; Pasquale is Italian; and Pascual is Spanish, to name just a few.

Another Pascal cousin is Pasco or Pascoe, the ‘o’ ending putting this name in the company of favorites like Arlo and Milo.

Maybe Springer carries some pop culture baggage thanks to talk show host Jerry, but it’s also a name with energy to spare. The surname could’ve referred to someone who lived near a spring; it might come from a German word meaning to jump; or it might’ve been an occupational surname for a person with a lively personality. Regardless, Springer feels like a seasonal choice, too.

Another surname ultimately related to a spring, Wells feels like a hopeful nature name – one that’s just right in the season of renewal.

In Greek myth, Zephyros was the god of the west wind, and also the spring.

What are your favorite spring boy names? What would you add to this list? 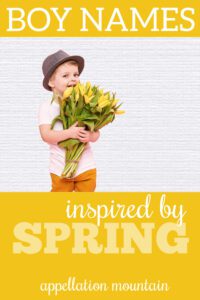 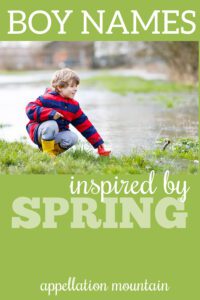