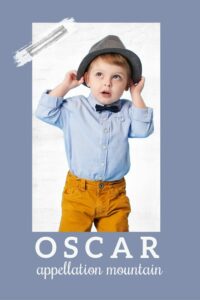 Thanks to Len for suggesting our Baby Name of the Day.

In Irish mythology, Oscar is the son of the fairy Niamh and the warrior-poet Oisin. This makes him the grandson of Finn MacCool. He’s a warrior, and a noble figure, too.

The legendary figure was popularized by eighteenth century Scottish poet James Macpherson. He claimed to have translated a series of epic poems written by a third century Gaelic poet, Ossian.

Macpherson most likely wrote every syllable himself.

But Oscar appears in these works, and the works were widely read.

Napoleon himself was a huge fan.

The French emperor persuaded Jean-Baptiste Bernadotte and his wife Desiree to name their son, his godson, Joseph François Oscar Bernadotte.

Then, in the middle of the 1800s, the Swedish royal family ran out of male heirs. French-born Jean-Baptiste Bernadotte, a capable military commander under Napoleon, became King Charles XIV John of Sweden.

The new king’s Paris-born son, Joseph François Oscar, became King Oscar I of Sweden in 1844 – from a work of historical fiction to the throne, in less than a century.

Literary giant Oscar Wilde was also named for the character.

Wilde, of course, was Irish by birth, born in Dublin. He became, arguably, the most successful playwright of the 1890s, dominating the London stage with hits like The Importance of Being Earnest and An Ideal Husband.

He’s equally remembered for the novel The Picture of Dorian Gray, and for the various scandals that marked his life. In our more enlightened age, he’s been posthumously pardoned for his crimes and honored with a window of his own in Westminster Abbey.

Wilde makes the name literary, creative, and lends it a vibrant wit.

Thanks to Macpherson, Napoleon and Wilde, this name has become internationally known.

The baby name Oscar has long been embraced by Scandinavians, and remains common in Sweden, Norway, and especially Denmark.

But it’s traveled across Europe, heard in Poland and France, Italy and the Netherlands. It’s also familiar across the Spanish-speaking world. While it’s sometimes spelled Oskar, particularly in Germany, this name is found in the ranks of popular names far and wide.

One more reason everybody recognizes this name: the Academy Awards.

First presented way back in 1929, the awards recognize achievement in the film industry. Winners receive a golden statuette referred to as “Oscar” since early days.

There’s much debate about how the award got it’s name. Some credit Bette Davis. Walt Disney referred to the award as Oscar as early as 1932. Others suggest either a gossip columnist or a long-time employee of the Academy christened the award.

What’s certain is that the name was formally adopted in 1939, and has been synonymous with the awards ever since.

While we’re talking about the glamorous life, fashion designer Oscar de la Renta became a household name during the 1960s.

Born to a prominent family in the Dominican Republic, a young de la Renta was sent to study in Madrid, Spain. By the 1960s, he was designed for First Lady Jacqueline Kennedy; decades later, Laura Bush wore one of his dresses to the Inaugural Ball. That’s just the beginning of a who’s who of famous women to wear his creations.

The designer lends this boy’s name an extra layer of sophistication.

THE ODD COUPLE and SESAME STREET

In 1965, Neil Simon’s play The Odd Couple introduced us to roommates Oscar and Felix. They were plausible names for men at the time. Then came a 1968 movie. ABC created a beloved television series featuring the characters in 1970, and it ran until 1975. Multiple reboots have followed, in the US and elsewhere. In the most recent version, Friends alum Matthew Perry played Oscar from 2015 to 2017 on CBS.

Oscar Madison was a sportswriter and a slob, in stark contrast to his fastidious photographer roommate Felix Unger.

And so it fit when Sesame Street introduced the world to Oscar the Grouch in 1969. The trash can-dwelling, bright green grump has been a staple of children’s television ever since. While the timing sounds exactly right, Jim Henson always said that the name came from the owner of a restaurant near his office.

The 1970s also gave us the debut of a legendary jingle.

German immigrant Oscar Mayer founded his cold cut empire back in late nineteenth century Chicago. In 1974, the first commercial declaring, “My bologna has a first name, it’s O-S-C-A-R,” debuted in the US.

And so a generation grew up singing and spelling this name, too.

During the 1990s, there were two familiar figures to wear the name.

There’s also Oskar Schindler, of Schindler’s List. The 1993 movie won the Academy Award for Best Picture. While Schindler was a historical figure, and truly did save the lives of 1,200 Jews during World War II, his story was less well known prior to the movie’s release.

It’s a fascinating story. The baby name Oscar has been worn a cartoon Muppet and kings of Sweden, a heroic German industrialist and a taste-making Dominican designer.

While the name’s origin in Irish legends is clear, Oscar feels like an international name, difficult to pin on a single language or nation.

It’s been popular in the US for years.

During the late nineteenth century, the baby name Oscar was well-established in the US. It ranked in the Top 100 from the 1880s into the 1920s.

As of 2021, the baby name Oscar stands at #226. It’s actually fallen in use slightly in recent years. But that takes nothing away from the name’s quirky classic charm.

The baby name Oscar has been used by notables across the generations. From Napoleon’s godson Oscar to actress Mandy Moore’s youngest child, born in 2022, Oscar is forever appearing in high profile birth announcements.

Actor Oscar Isaac, who made his name in the Stars Wars universe as Commander Poe Dameron, keeps the name in the spotlight, too.

While Oscar requires no nickname, it shortens easily to Ozzy, a cuddly-cool choice rising in use.

All of this makes the baby name Oscar feel like a versatile, time-tested choice. It’s as at home in the 21st century as it was in the 18th century.

What do you think of the baby name Oscar? 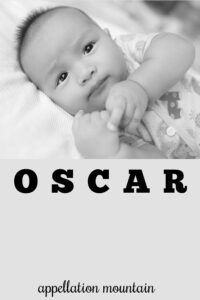 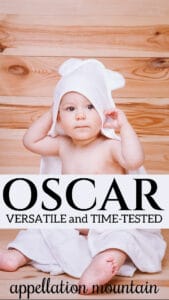