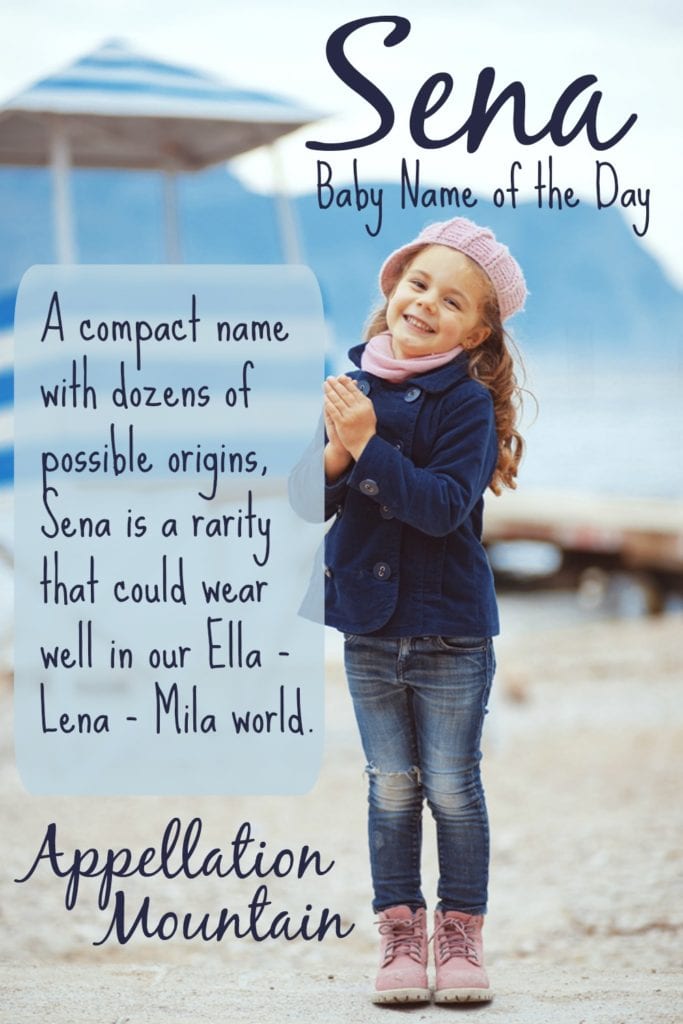 Sena fits right in with names like Mila and Lena, but remains a rarity in the US.

Thanks to Renee for suggesting her daughter’s name as our Baby Name of the Day.

Like many a two-syllable, ends-in-a name, this one surprises with its global reach. It’s not just that it sounds portable – it actually seems to appear across many cultures and continents, including:

Perhaps the most common origin for Sena comes from the endings of names. Just like -ella, -lena, -tina, and many other two-syllable, ends-with-a names for girls started out as elaborations of longer names. Antonella, Magdalena, Martina.

But it could derive from other names, too – think of Thomasina, Rosina, or even Selena or Serena.

Sena: By the Numbers

What we know for certain is that this rarity occurs steadily over the decades. As far back as 1880, ten girls born in the US were given the name.

For much of the twentieth century, somewhere between a dozen and two dozen births were recorded annually.

Those numbers may seem small, but in the late nineteenth and early twentieth centuries, it was enough to put Sena in the US Top 1000 most years through 1908.

Beginning in the 1980s, we start to see a handful of boys receiving the name, too.

Sena: On Trend, Under the Radar

All of this combined makes for a quietly on-trend name. Other favorites combine a simple sound with global appeal, like Lena, Mila, and Maya. There’s every reason to believe that this name would fit right in.

One high-profile fictional character might be all it would take to transform this from a rarity to a rising favorite.

What do you think of Sena? Would you consider this name for a daughter?