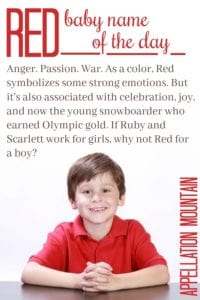 Red became a gold medal name at the PyeongChang Olympics in February 2018. Will it catch on with parents?

Our Baby Name of the Day was inspired by snowboarding.

Red begins the rainbow – remember your ROY G. BIV? It’s a primary color, and one found throughout nature.

As a word, it’s been around for ages, and it’s similar across languages. There’s the Spanish rojo and the Swedish röd. In English, it was pronounced more like Reid to start, and plenty of surnames – including Read – may have started out in the same manner as Brown.

We’ve been seeing this color when angry since the late 1900s. The color tends to symbolize passion and anger. Because it’s the color of blood, it can bring to mind danger, too. And, of course, it’s the color of Mars, the planet associated with the Roman god of war. In money matters, it symbolizes debt. Nathaniel Hawthorne gave us The Scarlet Letter, continuing a long tradition of using the color to mean sin. We once associated the color with the Bolshevik Revolution; later, the Soviet Union, and now communist China.

But they’re not all difficult associations. In the East, the color symbolizes happiness and good fortune. A red-letter day is a good one, thanks to the old custom of using colored ink to note feast days on calendars. If you’re a movie star, it’s your carpet color of choice.

So the color feels glamorous and powerful. It’s tied to the natural world, too, thanks to cardinals and  foxes and maple trees and the red rocks found in places like Colorado.

For babies born from November through February, it’s the color of the holidays. But that’s also true for the summer months, and it’s easy to see this as a patriotic, Americana pick.

But is it ever a name?

We know it’s been used as nickname. Think of:

In some cases it refers to hair color; it other cases, it’s impossible to explain. Though it could evolve naturally from some formal names – Frederick, for example, includes the letters. So do all of the -fred names, as well as Jared, Meredith, and more. On That ’70s Show, Eric’s dad seems to have earned the nickname from a contraction of his given name, Reginald.

Another likely place to earn this one? Surnames. NBC’s The Blacklist gives us criminal mastermind who answers to the nickname, though he’s officially Raymond Reddington. And Morgan Freeman played Ellis Redding in the The Shawshank Redemption.

The latest option in the headlines? Redmond, as in Gerard, the first-time Olympian who won snowboarding gold at PyeongChang in February 2018. It’s an Irish spin on Raymond, and the name of an affluent suburb of Seattle, home to Microsoft.

Over the years, it’s been used in small numbers, almost exclusively for boys. In 1925, a high of sixteen boys received the name.

In the middle of the twentieth century, it pretty much died out as the Red Scare swept across the US.

By 2001, five boys received the name. In 2011, that number reached eleven – almost certainly thanks to the popularity of James Spader’s character on The Black List. As of 2016, there were nine newborn Reds in the US.

Redding, Redmond, Redford, and yes, Reddington, have seen some use, too. The first might refer to music legend Otis; Redford, of course, brings to mind actor Robert.

Here’s the interesting thing: color names are having a moment. There’s no question that red rules when it comes to girls’ names, with Ruby and Scarlett handily outpacing Olive and Ivory and Skye.

On the boys’ side, names like Rowan and Rory carry the meaning, too, though perhaps it’s less obvious.

All of this makes me think that Red – or one of the longer surname-names – could be ready to catch on.

Would you consider this color name for a son? With or without a formal name?