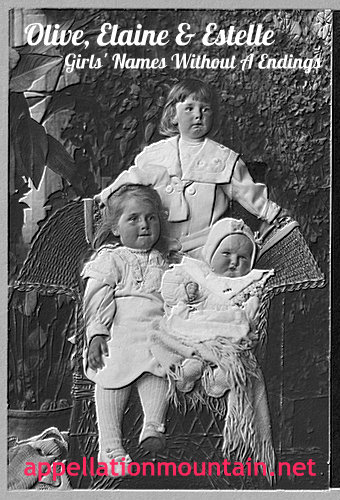 The most popular girls names today are flowing, mellifluous appellations.  Six of the current Top Ten end with the letter a, and three of the top four are three syllables or better: Isabella, Olivia, Sophia.

But could a more tailored era be ahead of us?  Lop off that final a, and there are some interesting possibilities to consider.  Many of them feel like antiques, though some manage to feel modern, too.

Isobel – Isabella has been a popular name for years now, and Isabelle isn’t far behind.  But the Scottish form of the name is stripped down, spare and unexpected.

Olive – Sweetly vintage Olive is gaining on mega-popular Olivia, especially now that actresses Isla Fisher and Drew Barrymore both chose the name for their daughters.  High-profile blogger Gabrielle Blair has launched a web series called Olive Us, named after her family’s middle daughter.

Elle – She’s a short form of any El- name, the French word for she, and a fashion magazine, too.  Supermodel Elle Macpherson and Legally Blonde’s Elle Woods helped put the name on the map.  Young actress Elle Fanning was born Mary Elle.  With Ella at #12, Elle feels tailored and feminine at once.

Neve – Okay, I’m cheating.  Nevaeh ends in -aeh, not -a, but you get the idea.  If Nevaeh is a nouveau coinage heavy with meaning, Neve is a crisp alternative, sometimes linked to Niamh.  Late night talk veteran Conan O’Brien chose the name for his daughter.

Alice – Alyssa has been a hit ever since Who’s the Boss? ruled ABC’s Tuesday night line-up.  Today, Alice feels like the gentler choice, conjuring up Wonderland and white rabbits.  It’s also the name Tina Fey chose for her older daughter.

Alix – A medieval French form of Alice, Alix is fresher than Alexa and more original than just borrowing Alex for a girl.

Camille – The Spanish Camila is in the US Top 1000 and Camilla is stepmother-in-law to William and Kate.  But tragic heroineCamille, with her French sound, feels promising, with the possibility of vintage nickname Millie or the boyish Cam.

Bel, Bell, or Belle – Between the popularity of Isabella and the Twilight empire, Bella is everywhere.  Remove the final -a, and you have a mini-name, a musical one, or a Disney princess.  If Mae or Elle made your short list, you might like the idea of Bel, Bell, or Belle.

Estelle –  Once best left to bellowing actors in white tees, Stella is a white hot choice for parents today.  Estelle is her old lady counterpart – for now.

Eve – Eva is in the US Top 100, and Ava is in the Top Ten.  Could Adam’s rib be the most stylish of them all?  She’s also a possible short form for more than a dozen names.

Marie – Spanish-speaking families lifted Maria past Mary on the popularity charts.  But Marie is the real rarity, last seen in the Top 100 back in the 1950s.

Julian – Like Alix, she seems boyish, but has valid roots as a feminine appellation.  If Julianna and even Julianne feel too elaborate, this is one to consider.

Valentine – Valentina has an awful lot of style, thanks in part to Salma Hayek’s use of the name for her daughter.  Valentine is bolder, a word name with connections to Cupid and candy hearts.

Elaine – Arthurian legend gave us the graceful Elaine.  Today girls are more likely to be called Elena or Alaina, but I think the literary Elaine wears well, too.

Elise – It turns out that Eliza is less popular than Elise, but I’ll list this one anyhow.  Drop off the zippy -za ending, and Elise is a quiet, gentle choice for a name with quite a bit of strength, too.

Maris – Marissa is fading, but what do you think of Maris?  She’s from the Latin term meaning “of the sea,” and she’s sometimes associated with the Virgin Mary.  She’s also the name of Niles Crane’s never-seen neurotic wife on long-running sitcom Frasier.

Are there other names that belong on this list?  Does your name end with -a?  If so, do you like the alternative form?  Would you consider any of these for a child?