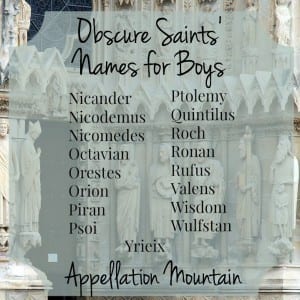 Over the years, I’ve covered an awful lot of obscure saint names. One of my very first posts was on Obscure Saints’ Names for Girls.  More recently, I’ve delved into the long list of possibilities for boys.

There’s no shortage of possibilities.  Sure, John and Peter, Luke and Paul, Thomas and James are all saints, and the names have been in steady use over the years.  But the idea here is to find names that are both Catholic and distinctive – names that aren’t likely to be shared with other boys.

You can find the first installment of this series here, or read on for Obscure Saints’ Names for boys, N through Z.

Nicander – Who doesn’t like a Nick- name? Less common than the equally saintly Nicholas, Nicander is the name of an ancient Greek poet, and a saint, too.  Saint Nicander was an early bishop of Myra, martyred sometime in the first century BC.  I also found a sixteenth century hermit, also Saint Nicander. Nicodemus – I’ll admit, I think this name might be the best on the list. It easily shortens to Nick or Nico, and there’s something cool and edgy about Nicodemus.  Now that Atticus is mainstream, could Nicodemus follow? The original bearer of the name was mentioned in the Gospel of John, and Michelangelo included him in a famous sculpture, usually reference to as the Florence Pietà. Besides the saint, there’s a character in Mrs. Frisby and the Rats of NIMH named Nicodemus. (That’s Jesus with Nicodemus depicted to the right.)

Nicomedes – We don’t know much about Nicomedes. It’s thought that he was a martyr of the early church, possibly from the first century, though maybe later. The name’s meaning is an interesting one: to think of victory.

Octavian – I’ve long loved Octavia, but had never given Octavian much thought. But if Julian can slip right into the US Top 100, why not Octavian? True, the saintly figure is overshadowed by the imperial Octavian. The saint was a bishop of Carthage in the fifth century, martyred on the orders of Vandal King Huneric.

Orestes – Orestes is best known to us from Greek myth, brother to Iphigenia and Electra, son of Agamemnon and Clytemnestra. It was not a happy family. It’s said Saint Orestes was a Roman soldier, baptized by Saint Peter himself. He was martyred in the first century, during the reign of Emperor Nero. The saint is also known as Edistus.

Orion – Yes, I first think of the hunter, the constellation in the night sky. But there was a martyr Saint Orion in the early church. At #399 in 2013, this name is one of the more popular choices on the list. As obscure saint names go, Orion is pretty mainstream.

Piran – Cornish names are a quirky, interesting set, and you’d expect Cornwall’s patron saint to have an unusual name – and so he does. Piran founded a monastery in Cornwall in the fifth century. He’s said to have been born in Ireland, and that suggests one possible origin for his unusual name. It could be a corruption of Ciaran, worn by two Irish saints from the same era.

Psoi – There are two saints answering to this rarity. First, also known as Besoy, Saint Psoi was martyred with his brother and mother during the Diocletian persecutions. Then a second figure, also known as Saint Psoes, was martyred at Kemet in the 500s. I can’t be certain how to pronounce this one – I’m guessing it rhymes with ‘soy’ – and I’m not sure it’s truly wearable. But it is fascinating, and might make an interesting middle name.

Ptolemy – One of the interesting things about early saints is that many share names with mythological figures (Orion), or ancient sages. We usually think of Ptolemy as a mathematician and astronomer. It was also a name favored by Egyptian rulers. And then there’s the obscure Saint Ptolemy, a Roman martyr whose death was recorded by Justin Martyr.

Quintilis – There are plenty of obscure saint names starting with Quin- to choose from. Saint Quintilis’ name means fifth; it was the name of the month of July prior to the reign of Julius Caesar. We don’t know much about his life, but we do know he died a martyr. Other Quin- possibilities include Quintius, Quintus, Quintian, and Quentin.

Roch – Born in Montpellier, France, Roch was said to be destined for greatness from the start. He was twenty when his parents died. He gave away his worldly goods and set out for neighboring Italy, where he nursed plague victims until he himself fell ill. Roch was miraculously cured and returned to Montpellier – where he was unrecognized, and imprisoned, where he eventually died. Roch is also known as Rocco, a name currently ranked #423 in the US. The saint was popular in the Middle Ages, and churches dedicated to him can be found throughout Europe. Roch rhymes with hawk, but would probably be said more like rock in the US. Rocky names for boys have more potential than you might think.

Ronan – Another Irish import, riding the same waves that brought Ryan and Aidan to our shores. Ronan ranked #433 in 2013. It’s said that he lived in the sixth century, was well-educated and became a respected bishop. But it wasn’t enough for Ronan, so he set sail for Brittany, to live a solitary life in voluntary exile. Miraculous stories abound, and the place he lived is now known as Locronan. His relics are kept in the parish church.

Rufus – Quirky Rufus has been worn by at least eight saints, without counting similar names, like Rufinus. Historical evidence for some is minimal. But there’s the second century Saint Rufus, martyred under the Emperor Trajan in the second century. There’s also a Rufus in the New Testament. Rufus has been out of the US Top 1000 since the 1980s, but there’s been a tiny uptick in use in recent years.

Valens – The name of a Roman emperor, and the surname of late musician Ritchie Valens, this name doesn’t scream obscure saint names. But there was a sixth century Saint Valens, a bishop of Verona. His names strikes an interesting note – less romantic than Valentine, not quite as bold as Valor. And yet, this name shares roots with both Valentine and Valor, meaning strong and vigorous.

Wisdom – I’m really out on a limb with this name! Wisdom was said to be the mother of Faith, Hope, and Charity. She’s often called Sophia instead. It’s said that Wisdom’s young daughters were tortured and finally martyred for their faith. The mother’s fate is unclear. There’s also the concept of Holy Wisdom, which has inspired the names of churches and monasteries. 37 boys and 30 girls were called Wisdom in 2013. This might be too much to live up to – both in the secular and the spiritual senses. And yet, given our interest in virtue names, Wisdom earns a spot on this list.

Wulfstan – Ready for another great Anglo-Saxon rarity? Wulfstan comes from the words for wolf and stone. Saint Wulfstan lived in the eleventh century. The name seems to have been relatively common in the era. Saint Wulfstan was bishop of Worcester. He opposed the slave trade, helped the poor, and focused on several building projects. But perhaps the most notable thing about Wulfstan is this: he was the only pre-Norman conquest bishop to hold on to his seat. In 2015, this name feels quirky and fierce.

Yrieix – I’m not sure this name is wearable, but isn’t it different? Saint Yrieix was born in Limoges in the 500s to a wealthy family. He converted to Christianity as an adult, and built churches and a monastery. There are a handful of places in France known as Saint Yrieix in France, though in official church records, he’s often referred to by his Latin name: Aredius. As for pronunciation? Listen here.

Do you have a favorite obscure saint name from this list? I’m crushing on Wulfstan! Are there others you would add?