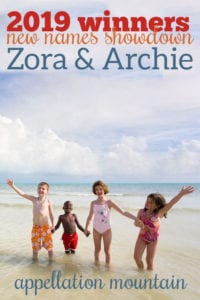 From those sixteen names, we voted all the way down to two finalists each: Bellamy or Zora for girls, and Archie or Benedict for boys.

The purpose of the New Names Showdown is to choose the name most likely to rise in the rankings in the coming years. We don’t know, of course, but we’ve made some pretty good guesses over the last three years, especially on the boys’ side.

In 2016, the first-ever winner of the New Names Showdown was Arden. Slightly literary, vaguely outdoorsy, and very much unisex in style, hopes ran high for Arden. It seemed like a logical successor to chart-topping literary pick Harper. And yet, Arden remains very much of the edge of the Top 1000 – debuting in 2015, falling off the charts by 2017, only to return again in 2018 at #967. Still, I think Arden is one appealing television character away from catching on.  Read more about Arden here.

A year later, Sylvie too the top spot. Long a favorite with the baby naming community, Sylvie appears on plenty of parents’ lists. The name makes a worthy successor to Ava and Ivy and Sadie, too. At #897 this year, Sylvie is slowly edging towards the mainstream. Read more about Sylvie here.

Last year, the name everyone loved was Marlowe. Like so many favorite girl names, it split the difference between retro (think Marlo) and thoroughly modern, a mix of Madison and Harlow. Instead of gaining in use, it fell out of the popularity rankings in 2018 … but that might just be a blip. It’s still a name rich with potential. Read more about Marlowe here.

Now for the big news!

Joining Arden, Sylvie, and Marlowe on our list of New Names Showdown winners is …

While it wasn’t a landslide, Zora held a solid lead throughout. The final tally gave Bellamy not-quite 46% of the vote, with Zora winning 54%.

Zora regularly featured in the US Top 1000 until the 1930s, but it’s been gone for decades. Now it’s back – in a big way! Credit the zippy letter Z, the name’s similarity to favorites Nora and Cora, and a great meaning borrowed from the natural world – dawn. Read more about Zora here.

Our very first New Names Showdown winners was Wilder. It’s been a runaway success. After entering the US Top 1000 at #962, it’s rocketed to #523. I think it’s a real shape-shifter of a name. Wilder feels as preppy as Carter, but as outdoorsy as River. It almost fits with epic boy names like Maverick, but I can imagine a banker or surgeon or judge called Wilder, too. In any case, it’s clear that this community knows what’s next – you accurately guessed the next big thing! Read more about Wilder here.

Last year, we added another promising name to the mix: Wells. Sure enough, Wells debuted at #915, and gained substantially, reaching #735 this year. Read more about Wells here.

And the winner on the boys’ side this year …

The final contest came down to two British names – the dapper, buttoned-down Benedict and the energetic, casual Archie. This contest was close, flip-flopping more than once. But in the end, Archie carried the day, with 53% of the vote. The name returned to the US Top 1000 at #992 this year. If you’re following, that means it was clearly on the rise well before Meghan and Harry welcomed the newest member of the royal family. But now we’ll have to see – will American parents avoid the name for fear it’s too Buckingham Palace? Or this help push the name to even loftier heights?

We’ll have to wait and see, but it’s clear this community is big on Archie. 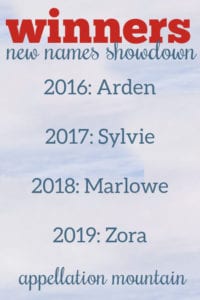 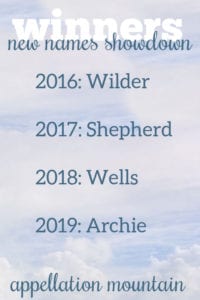