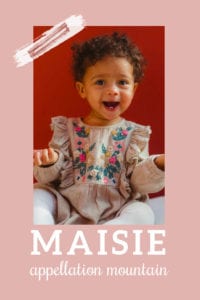 The baby name Maisie first caught on in the UK, before joining Sadie and Hattie on the US popularity charts.

Thanks to Laura and Audra, for suggesting our Baby Name of the Day.

The enduring Margaret offers many a nickname: Maggie and Meg, Peggy and Daisy, Greta, Gretchen, and, of course, Maisie.

In Scottish and Irish, Margaret became Mairead, and Maisie evolved from there.

It’s also spelled Maisy and Maizie and other combinations, like Mayzee, are out there. Dr. Seuss spelled it Mayzie. Senator Mazie Hirono was elected in 2013 to represent Hawaii.

Henry James’ 1897 novel What Maisie Knew chronicles the early years of a young girl whose parents divorce and generally behave badly. It became a critically acclaimed movie in 2012.

Back in the 1940s, a movie series inspired a hit radio show. Actor Ann Sothern played brash Brooklyn showgirl Maisie Ravier. Sothern’s career would span six decades, ending with her first Oscar nomination at the age of 78. But Maisie remains her iconic role. If you’ve ever heard the phrase “Likewise, I’m sure,” then you’ve heard Maisie’s most famous line.

In children’s literature, there’s Dr. Seuss’s Daisy-Head Mayzie, about a schoolgirl sprouting a yellow flower from her head. The story is relatively obscure – it was published posthumously in 1995, meaning that generations haven’t grown up with Mayzie. But there’s also a bird named Mayzie in Seussical, and so a younger generation may see the name differently.

In the early 2000s, Lucy Cousins penned a series of books about Maisy Mouse. (The character is still going strong.) A television series followed around the same time, aired on Nick Jr. in the US.

Lucy Cousins, however, is English. And in the UK, the name is less of a surprise. It was already a Top 100 choice, with the -ie spelling, when Cousins’ mouse met the world. It seems possibly that her character helped boost the -y version, as that name caught on quickly in the early 2000s, though it remains less popular.

The Perishers, a long-running British comic strip also included a little Maisie, a strong-willed little girl sometimes compared to Lucy from the Peanuts in the US.

Perhaps the most famous Maisie of our moment is Game of Thrones alum Maisie Williams. Famous for playing Arya Stark – and growing up on the show.

Williams was born Margaret, but got her nickname from The Perishers character.

The rise of the baby name Maisie is almost certainly tied to Game of Thrones.

Of course, it’s not just about the young actor.

The baby name Maisie fits neatly with another trend – our love of sparky nickname names like Sadie and Hattie. Plus the Mae sound, heard in names like Maeve, feels current current, too. Plus, surname Macy, floral name Daisy, and vintage charmer Mabel all feel like they point to a rise for Maisie, too.

It’s also possible some of the many Margarets born in recent years could answer to the baby name Maisie. But just as Molly now feels separate and distinct from Mary, it’s not obvious to most how Maisie evolved from Margaret.

What do you think of the baby name Maisie? 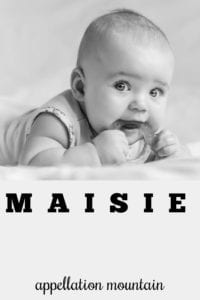