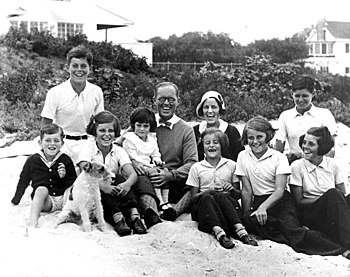 The family is American royalty.

Thanks to Sara for suggesting Kennedy as our Baby Name of the Day.

It’s easy to imagine Kennedy catching on, even without the accomplished family.

Kennedy is an Irish surname.  Legendary High King of Ireland, Brian Boru, was the son of Cennétig – another king, whose name was Anglicized as Kennedy.  They reigned around the tenth century.

Cennétig means something like deformed head, so it isn’t the most appealing of meanings.

John Fitzgerald Kennedy –  Jack to his family and commonly referred to as JFK – became the 35th President of the United States in 1961. A World War II veteran and youngest president even elected, Kennedy’s 1963 assassination made him a martyr figure.

The family remained very much in the public eye.  Countless schools, parks, townships, streets and the like had been named in honor of the late president. When JFK’s brother Bobby was assassinated during his run for the White House in 1968, Robert F. Kennedy schools and such were added to the mix.

Despite the brothers’ memory, Kennedy fell out of use. It may be that he never quite caught on – hero names rarely end up in the Top 100. It’s also hard to gauge the impact of youngest brother Ted Kennedy’s 1969 debacle – the drowning death of a passenger in his car on Chappaquiddick Island.

Kennedy re-entered the charts for both boys and girls that year, partly because of our interest in surnames, and also because former First Lady Jacqueline Kennedy Onassis passed away that spring.

It was also the age of MTV VJs, and Lisa Kennedy Montgomery, who answered to her middle only, was the quirky host of Alternative Nation, from 1992 through 1997.  With bands like Smashing Pumpkins and Nirvana hitting it big, plenty of us were seeing VJ Kennedy on air – and thinking of it as a girl’s name.

By 2007, Kennedy was just outside the Top 100, fitting in with #65 Mackenzie and  names like Kendall and Mckenna.

Today, Kennedy is still climbing.  She ranked #64 in 2013, even while some of her fellow Ken- names are on the decline.  Kennedi ranked #443 and Kennadi also climbed, though she’s yet to crack the Top 1000.

Overall, Kennedy is a hero name, one that feels kelly green and red-white-and-blue at once.  And while it is still wearable for a boy, odds are that most Kennedys born in 2014 will be wearing pink.