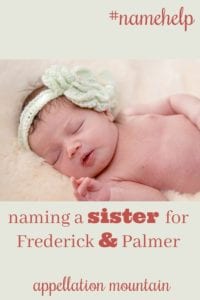 Update: She’s here! Scroll to the bottom to find out what they chose.

I’m a Jersey girl who married into a Very Southern family. Our son’s name is Frederick, in keeping with my husband’s family tradition. Our daughter is Palmer, which was my mother’s maiden name, but his family’s habit to use maiden names as given names.

Now we are expecting our third, and just found out we’re having a girl. If it was a boy, we were considering William or Ellis, or maybe William Ellis or Ellis William, both family names.

But now that it’s a girl, I’m stumped. My maiden name, and most of the surnames in my family, are long and complicated. (Palmer was the only one that worked, so it was an easy decision!) There are lots of names from his side that I like for a girl, including Landry, but I feel like our kids’ names are mostly from his side.

Maybe I’m being too sensitive about that … but, we have his family’s last name, we live near his whole family, near where he grew up. My husband gets this, and he’s perfectly willing to use names from my family. But I feel like he’s got all the good ones that I actually like!

One possibility might be Catherine, my grandmother’s name from the other (not Palmer) side. But Frederick, Palmer, and Catherine? I’m not sure I like that, either.

Please read on my for my response, and leave your thoughtful suggestions in the comments.

Instead of talking about names, let’s talk about strategies.

Because you’ve hit on one of the reasons some parents avoid family names: it’s tough to use them equally. And I feel your struggle! In many ways, your kids are growing up in your husband’s backyard. And while it’s lovely that you’ve continued a family tradition, the impulse to hold on to your family history, too, is a good one.

Use part of a family name – I know a family with a similar situation; her name was a long, four-syllable German surname. She took part of the name – just two syllables – and used that instead.

Use a sound from a family name – Going even one step further, you might use a sound from a family surname that echoes a more familiar – and wearable – given name. The Polish surname Adamczyk could become Ada; the Italian surname Giuliani might become Julia; and so on. In some cases they might be related, but that’s a secondary consideration. I’d focus on sound.

Translate a family name’s meaning – So many surnames are occupational names, even in other languages. Zimmermann is Carpenter in German; Sarto is Tailor in Italian. Place names and descriptive names can work, too.

If none of these appeal, and you do end up using a first name from your husband’s side – and both Landry and Ellis seem like great options – that doesn’t mean your family names have to be out entirely. You can always tuck them in the middle – though I suspect that doesn’t really address the imbalance!

Which makes me think that maybe this baby’s name is Catherine. It’s not immediately a style match, but it fits your family’s pattern exactly. The theme is “meaningful family names” not “surnames for girls.” Should you have a fourth child in the future, it’s even less obvious that Catherine and Palmer don’t quite go together: Frederick, Palmer, Catherine, and Ellis. (I know, I know – one baby at a time!)

Another possibility? If matching style matters more, then would you consider choosing a name that’s deeply meaningful to you? Did you grow up in a town or on a street that might make a great name? Have a favorite artist or author whose name might work? The key is to make sure that all of your children have names with stories, so the younger child isn’t left out. But the stories don’t have to be identical at all.

I’m tempted to suggest names, of course. Hadley? Sloane? Blair? But I think this is truly an exercise in returning to your roots and finding a name that feels every bit as special as Frederick and Palmer, even if it takes some creativity to get there.

Lastly, you don’t mention if Ellis is from his side of the family or yours, and I know you have it on your list of boy names. But it strikes me as an equally good choice for a sister.

Stephanie writes: Thanks to everyone for their help! We hadn’t thought about Ellis for a girl, but when we read all the positive comments, it just clicked. We debated Catherine Ellis or Ellis Catherine until the last minute, but ended up going with Ellis Catherine. We call her Ellis Cate and Ellie Cate, too – loved that idea! Thanks again.