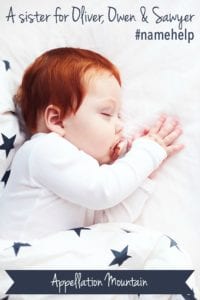 We have three sons: Oliver, Owen, and Sawyer. Oliver and Owen were easy choices. With Sawyer, we knew we didn’t want another O name, and we really didn’t have a name picked out until we were in the hospital. I love his name now, but I don’t want to go through that again!

We are expecting our fourth (and last) child in October. It’s a girl! After naming three boys, you’d think I would have a long list of girl names. But we’re finding ourselves stuck again.

Names we can’t use:

My husband’s favorite is Quinn, but it was on our boy list for Owen and Sawyer, so it feels boyish, and kind of used up, if that makes any sense.

I really like Eleanor and Penelope. But I dislike nicknames Ellie and Penny, so maybe we shouldn’t risk it?

Congrats on your new baby! It sounds like you’ve got a good idea of what you like in boy names. While I can’t quite put Oliver, Owen, and Sawyer into a single style category, they sound like brothers. All three names count as modern favorites, names with history that are currently quite stylish.

Many parents favor a slightly different style when naming daughters. Naming a daughter probably feels like starting from scratch.

The good news? Eleanor, Penelope, and Quinn all qualify as modern favorites. I can imagine any of them as sister names for your boys.

Now, to the names:

Alice – For many years, more elaborate Al- names held sway. We named our daughters Alyssa and Alicia and Alexandra. But today, Alice ranks in the US Top 100. It’s nickname-resistant, feminine but not frilly, and sounds like a sister for Oliver, Owen, and Sawyer.

Claire – You’ve mentioned that Quinn strikes you as masculine. I wonder if your husband would go for a traditionally feminine name that happens to be equally brief? Classic Claire comes to mind immediately, but there are plenty of slim, trim names for girls, like Kate, Grace, June, and Mae.

Eloise – Eleanor and Penelope both have a strong “el” sound, so I wonder if other Ellie names might appeal? I think Eleanor and Penelope could easily go through life nickname-free, but the shorter the name, the more likely it is to happen. (The ultimate “el” sound name that also fits in the spare and elegant category? Elle.)

Hadley – If you liked the idea of Harper, but want something that doesn’t repeat Sawyer’s sound, would another H surname work? Hadley comes to mind immediately, a surname-name like Harper and Quinn that feels familiar for girls in our Ashley-Hailey age.

Ivy – Short names can pack a powerful style punch. At just three letters, Ivy still boasts a strong, distinctive sound. It might be called vintage or even “old-fashioned,” but Ivy feels very much at home in the twenty-first century.

Rose – I almost listed Rose with the Claire names, but I think it deserves a separate spot. If you really liked Rowan, Rose might appeal. Word names, color names, and nature names dominate trend lists today, and Rose belongs in each of those categories. And yet, Rose names claim centuries of use.

Ruby – Ruby qualifies as antique. But I’d call Ruby colorful and bold, a name with history that wears beautifully in our era. Like Ivy, it fits with the nickname-proof choices, and feels feminine without being too elaborate.

Stella – I suspect your husband isn’t crazy about two-syllable, ends-in-a names for girls. Or at least he tends to dismiss them as old-fashioned, right? And yet, I think Stella might make for a good compromise. It feels a little bit edgy, includes the strong ‘el’ sound you’re drawn to, but remains pretty simple and straightforward – a true modern favorite.

I usually can name a favorite at this point, but I’m torn! Eloise would probably be my top choice, but possibilities like Hadley seem promising, too. This list might have some more great ideas, too.

Let’s turn it over to the community. I know they’ll have some great insights and suggestions!

Readers, what would you name a sister for Oliver, Owen, and Sawyer?