Hayley and her husband are expecting their fourth child, a boy, in May.

Their new son will join:

We want to stick with the Irish/Gaelic origin – not too mainstream that there will be numerous around.

We’re obviously not bothered by the unique spelling – but it is not necessary to choose something with a difficult spelling!

Middle names are family names.  (Hayley and her husband have some possibilities in mind for this baby, but aren’t quite ready to share.)

Hayley and her husband prefer to wait until their child’s birth to make the final decision, but she adds: we need a couple (of names) to bounce around the day of – our last was ‘Cookie’ for 24 hours 😉 so want to make sure we aren’t internet surfing minutes after delivery!

Let’s help Hayley find some great possibilities for her baby-on-the-way!  Please read on for my response, and add your own suggestions in the comments!

Ooh!  You’ve definitely established a pattern for your children’s names, and it’s one that leaves lots of room to find names for future siblings.

Though I laughed out loud at this part:

… it is not necessary to choose something with a difficult spelling!

Since you’ve already chosen three great names for your children, it is pretty clear what you’re likely to like:

This still leaves lots of options – no wonder narrowing it down is a challenge!  My first brainstormed list easily sailed past eighteen names.  I dropped a few because they were Welsh (Cadogan, Carew) or Scottish (Struan).  I’m not sure how you’d feel about surnames, so I skipped Donovan and Sullivan.  And Cian seemed like the right vibe, but maybe felt more trendy than Gaelic. 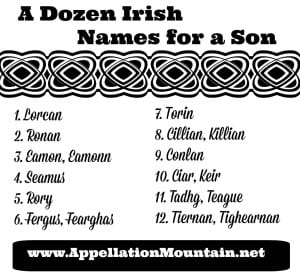 Here are some names that fit with Lochlann, Saoirse, and Aoife:

Which Irish names would you suggest for a son?  Do you think any of these pair well with Lochlann, Saiorse, and Aoife?