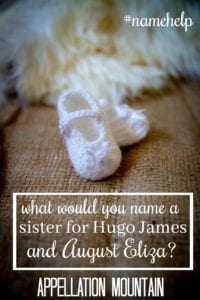 We are pregnant with our third baby, a girl, and are really struggling with names! Our son is Hugo James and our daughter is August Eliza.

We have talked about the following names for the third baby:

But are open to all suggestions!! We would love it if you were able to pass on some ideas.

Congratulations to you and Mike on your third child!

As you’re discovering, naming is the one thing that often doesn’t get easier as we become more experienced parents. Maybe it’s because we’ve already used our favorites, or maybe we feel like the names of our older children rule out some possibilities for our younger children.

That’s definitely something I’m thinking about here. August feels perfectly appropriate for a daughter. After all, April, May, and June have been girls’ names for ages. But because August is more often used for boys – it’s currently in the boys’ Top 200 in the US – I think it makes choosing sister names a little more difficult. If I heard Hugo, August, and Willa, for example, I would assume you had two boys and a girl.

That’s not a big deal, but it makes me wonder if something more tailored would better suit?

Harlow seems like one promising direction. Popularity is complicated, but I’d say this: Harlow is about as common as Hugo, so if Hugo feels like a reasonably underused name, then Harlow probably won’t feel any more common. But it might seem like a trendier choice, a sister for Harper and Marlowe and Piper, all names that weren’t really heard much before the late twentieth century. That makes them different from Hugo and August, names with long histories of use.

Ines/Inez works nicely, too. But you’ve said your husband isn’t on board. Do you think that’s likely to change? If not, it’s probably best to keep looking.

After all this, I’m leaning towards Maple, too! I can see why it works so well. And with a more traditional middle – Maple Willa, Maple Annabelle – I wouldn’t worry about the whimsy factor. But let’s look at some other options.

A Sister for Hugo and August

Avalon – If you’re drawn to out-there names like Maple, I wonder if Avalon would appeal? It’s got history galore, even though it’s relatively rare as a given name. Hugo, August, and Avalon sound right together, even though you’re going from a more conventional boys’ name to a seldom-heard choice for your youngest.

Eden – Have you talked about Eden? Like Avalon, it’s new-ish as a given name – but it’s pretty mainstream, in the Top 600 for boys, and Top 200 for girls. That’s another bonus. While it’s more common for a daughter, it feels a little more unisex. That balances out August’s name nicely.

Collins – On that note, there are plenty of surname names you might consider. Collins grew in use thanks to the character in 2009 movie The Blind Side. It ranked in the boys’ Top 1000 in the late nineteenth and early twentieth centuries; today, it hovers around the mid-600s for the girls. Since you have one name that ends with ‘o’ and another with ‘t’, I looked for names that had another distinctive ending sound, like Collins’ s.

Haven – If you like Harlow, but worry it feels too popular, I wonder if Haven would appeal? It’s just inside the current US Top 300, so it’s actually more common than Harlow. But somehow the name’s virtue name status makes it feel a little more substantial.

Juniper – Maple automatically made me ponder other tree names, and Juniper seems worthy of consideration. First, it has history before the 1990s – there’s a thirteenth century (male) Saint Juniper. Second, it’s just inside the current US Top 400, making it about as popular as Hugo, which seems to be your sweet spot.

Maren – Maren has plenty of possible origins, but I tend to hear it as a more tailored twist on traditional Mary/Marie names. It can also come from the Latin word for the sea, or maybe a Roman family named derived from Mars. I like it because it’s feminine, but only just.

Rowan – This name ranks in the current boys’ Top 200 and girls’ Top 250, making it the most popular name on this list. But I think it works for a few reasons. First, it’s another tree name, like Maple. Second, Rowan shares Harlow’s long ‘o’ sound. Lastly, it feels slightly more traditional, if only because it’s been used as a place name and surname for years.

Tamsin – Tamsin is far more familiar in the UK than the US. But there’s no reason it wouldn’t wear well here, especially with so many tailored/surname-style names on the rise. It developed as a feminine form of Thomas, but while Thomas is an evergreen classic, Tamsin feels brisk and modern.

I keep going back to Maple, Rowan, and Juniper. Maybe it’s because I see August as a summery nature name, and choosing a tree name for her sister links the two names in a quiet, subtle manner.

Rowan seems like it has it all – the same bright ‘o’ sound as Harlow, a tailored sound to match August, and while it’s not rare, it’s also not a Top Ten name, not by a long shot.

So my vote goes to Rowan – maybe Rowan Willa? – but I’m so curious to hear what others will suggest.

Readers, what would you name a sister for Hugo James and August Eliza?