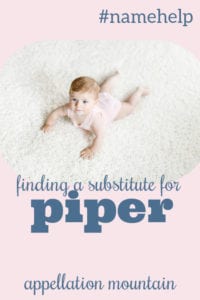 UPDATE: Gemma Larkin is here! Thanks to all for your help.

Our journey to parenthood has been a long one, but we’re finally expecting our first baby in just a few weeks. It’s a girl! I feel so lucky and blessed, and cannot wait to have my daughter in our arms.

Here’s the problem: over the last eight years, we stopped talking about lots of things about babies. It just got too hard. That included names. Along the way, my sister-in-law had a daughter, and she unknowingly used my all-time favorite girl’s name, Piper, for my niece.

I’m not bitter. She didn’t know, and even if she had known, I’m not sure I would have asked her to choose another name. (At the time, I wasn’t sure if we’d ever have a child.) And I really do love my niece (and my sister-in-law) and I’m glad she has such an awesome name.

But now here we are, at 32-and-counting weeks, probably going to deliver at least a little early, and with no ideas. Our last name is like Jimi Hendrix, but spelled with a -cks. That rules out a lot of ‘s’ ending sounds, like Alice, though I don’t think that’s really a name I’d like.

Congratulations! How exciting to be expecting a daughter. And while I’m sure it’s not easy, I applaud you for taking a generous approach to your niece’s name. Because the choice is made, and you’re right – if your daughter isn’t Piper, at least you get to hear and say the name all the time for another child you love.

You asked where to begin, and I’m going to start with … Piper.

No, you can’t use the name. (Or maybe you could. But you don’t want to.) Instead, you can consider names that embody the same spirit. Modern, but not invented. Popular, but not chart-topping. Energetic, breezy, nickname-proof, fresh.

I might even say spunky. (It’s a word that can feel a little bit loaded, and yet … it’s the word that comes to mind.)

We’re naming Piper’s cousin, but it’s almost like we’re looking for a name for Piper’s sister. I worry that’s a hurtful thing to say, but it’s often a helpful approach. Even if you loved the name Pippa or Parker second-best, you might avoid those choices to sidestep potential confusion amongst grandchildren.

So, if not Piper, would you consider:

Afton – A lovely, lyrical river name, Afton comes from a Robert Burns poem. Because it’s been set to music over the years, “sweet Afton” has inspired plenty of parents. But not that many. I think it has the same tailored, but feminine, quality of Piper without sounding at all similar.

Daphne – To an earlier generation, Daphne was the red-headed member of the Scooby Gang. But that association has faded, and now Daphne fits with Penelope and Zoe and Chloe – a classical Greek name with fresh appeal and a mythological backstory.

Esme – Esme has been around for ages. JD Salinger used it for a short story. But lately it’s gotten more attention. Maybe it’s the sound – a razor-y z, followed by a bright and springy “may.” Or perhaps we should credit Twilight, which gave the name to a vampire matriach. But I think it’s long since exceeded the appeal of the Stephenie Meyer novels.

Larkin – Bird names are seeing increased use, with Wren leading the flock. But Lark has potential, too, and Larkin nods to the songbird. And yet this name is actually a medieval nickname for Laurence – though that’s far from common knowledge. I wonder if that makes it much too close to your name, or a fitting daughter name for Lauren?

Maren – Maren might be a form of Mary, or maybe it’s a tailored surname choice or derived from the Latin word for the sea. Regardless, it’s risen in use over the last few years, and seems likely to climb even higher. As with Afton and Larkin, I wonder if the tailored, not-quite-unisex sound mirrors some of what you love in Piper?

Marlowe – When it comes to lively names, I instantly think of the o-enders. Between gentle Willow and dramatic Cleo, I think Marlowe hits the right note – modern, unexpected, but not too out-there.

Quinn – For all that Piper feels fresh and unexpected, it’s actually a Top 100 name. The same is true for Quinn, so I wonder if this might appeal.

Teagan – Another Irish name, Teagan seems like a promising alternative to Piper. Despite a unisex sound, it’s consistently used in much higher numbers for girls – just like Piper.

Thea – A short form of Theodora, Thea ranks in the current US Top 1000, while the longer version does not. It’s swingy and upbeat, a mini name with tons of style.

Overall, I’m most drawn to Marlowe and Teagan as substitutes for Piper. But that’s because they strike me as the closest equivalents, which isn’t always the best way to think about such questions. I can imagine the same family that loved Piper also having names like Thea or Daphne near the top of their lists – and so I wonder if that’s what has you stuck? There are the names that ought to substitute for Piper … and then there are the names that make your heart sing.

Let’s turn it over to the readers, because they’re always so brilliant with their suggestions: what would you choose instead of Piper? 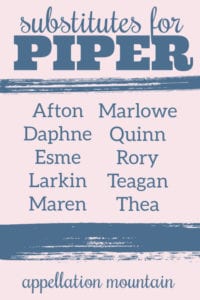