Peatreace and her husband are expecting twins, a boy and a girl in a few weeks. They’ve chosen Ptolemy John for their son, but they’re struggling to find a name for a daughter.

My partner and I love ancient Egypt and would like to give our daughter a name with this meaningful attachment.

We love all names that relate to Egypt: Egypt, Cairo, Cleopatra, etc. However, we would like to have something new and unique. We thought a hybrid of Egypt and Anne – Egyptanne. We understand it sounds like the word Egyptian, so perhaps we could name her Egyptian instead!?

We have had many criticisms on the name. Is it really that terrible?

Furthermore, any other hybrid names that relates to Egypt we really appreciate you letting us know.

Read on for my answer, and please leave your thoughtful suggestions in the comments! 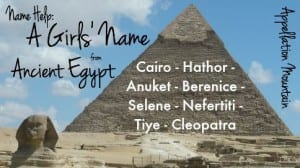 Baby names inspired by Egypt! It’s a bold theme, but there’s no reason it can’t work. Ptolemy, with that silent letter P, is intellectual and quirky. But it will also be widely recognized as a name, even if it isn’t a name that’s often heard on a child in 2015.

But here’s the catch: the more unusual the name, the less likely that it will please others. Cleopatra would be surprising, but my guess is that it would be received like Ptolemy. You’d get responses like, “That’s not a name you hear too often!” Or, “How interesting. Is it a family name?”

Does it matter if a name is really, really out there? Maybe not. I’m guessing that you’ve invested an awful lot of time spelling and repeating your name, and it doesn’t trouble you. There are downsides to choosing a really unusual name, and yet overall, I think that you can be bold and daring when it comes to names, and believe that it won’t be burdensome for your child.

So let’s look at your options:

Cairo – I think Cairo is a bold, but wearable, name choice. It seems slightly more masculine to my ear, but model Beverly Peele gave the name her daughter. And, of course, ends in ‘o’ options work for boys and girls. Ptolemy and Cairo sound great together.

Cleopatra – Cleopatra has lots of advantages as a given name. First, we recognize it as a name. Second, it’s associated with quite a powerful woman, but still shortens to the friendly, upbeat Cleo. Ptolemy and Cleopatra are clearly brother and sister. In fact, it might be a little too close of a fit for those who know their ancient Egypt. The most famous pharaoh Cleopatra – there were many – was Cleopatra VII, the last ruler of the Ptolemaic Dynasty.

Egyptanne – There are two issues with Egyptanne. It’s a smoosh of Egypt and Anne, correct? So it should be said just like Egypt-Anne. And yet, my eyes do want to read something different. It’s the downside of inventing a truly new name – a degree of confusion is inevitable. You and your partner need to decide whether that’s okay with you.

Egyptian – Mariah Carey and Nick Cannon named their son Moroccan, after a room in their home. It was the first time I’m aware of a demonym – a term used to describe residents of a specific place – being used as a given name. (Though there have probably been a few others.) On the one hand, it’s much clearer to say and spell than Egyptanne. On the other hand, it’s not any more expected as a given name.

Egyptianne – I usually prefer word names spelled as they would appear in the dictionary, but I might make an exception in this case. Egyptanne seems confusing, and Egyptian not quite like a name. Egyptianne is still quite the daring name, but I wonder if it strikes the right balance between the two?

Anuket – Anuket is the goddess of the Nile River in Egyptian myth. It’s every bit as offbeat as Ptolemy and even less expected as a given name. But Anuket feels like it could be a girl’s name in 2015, and also seems more authentically Egyptian than some of the heavily Greek-influenced names of the notable rulers.

Berenice – Berenice is another named favored by the Ptolemaic rulers. It’s Greek in origin and means bringing victory. (The family was originally from Macedon.) We know the name better as Veronica, the form most common in recent years.

Selene – Another name from the Ptolemaic family. They used the same names over and over again, so it’s a remarkably limited set of names.

Nefertiti – Among the most famous of all Egyptian queens. As given names go, it would be a little bit bolder than Cleopatra, but not as unexpected as Egyptanne.

Tiye – Wife of Amenhotep III, and an influential figure in her own right. The origins of her name are obscure, possibly because her family was foreign.

If you’re focused on an Egypt-plus name, I do think Egyptianne might be the better bet. Though it strikes me that just plain Egypt is a great possibility, too. I’m also drawn to Anuket.

Readers, what do you think? Are there other Egyptian possibilities I’ve overlooked? 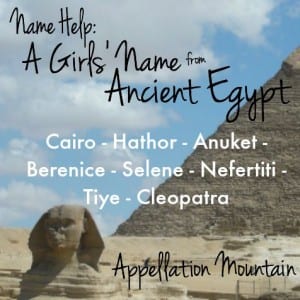