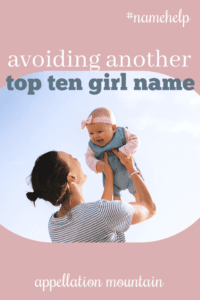 We have two daughters: Charlotte, born in 2012, and Amelia, born in 2015. We’re expecting our third daughter in a few weeks, and want to avoid another Top Ten name. While we knew both of girls’ names were popular, neither were in the Top Ten when we chose them.

My favorite name for this daughter was Evelyn, but I see that’s in the Top Ten now, too.

It’s not that I don’t like their names, but we do hear them A LOT, and I wish it was something a little less common. My name is a little bit different, and I always liked that. (My husband is Michael, and he’s a junior. He says it doesn’t bother him, but if I call Mike in a crowded room, more than one guy turns around!)

It is very, very difficult to know which names will be favorites among our circle of friends. There are around 350 kids in my children’s school. There’s one Ava, a single Emma … and two Londons.

But it is true that Top 100 – and especially Top Ten – names do tend to recur. Even if you don’t hear a lot of them in your immediate circle of friends, as your child moves into the school years, you’ll probably hear those popular choices repeating.

It hasn’t changed the way you feel about your older daughters’ names, so part of me wants to encourage you to use Evelyn, if it’s the name you love. But I get that nagging feeling of wanting something all your own, too.

Parents often get stuck at this point, believing that names are either appealing and popular, or weird and rare. This is false! Plenty of names qualify as “normal” – but fail to rank in the current US Top 100, 500, or even 1000.

Let’s take a look at some great options:

Adelaide – Shorten it to Addie, and she’ll be lost in the Addie-Maddie crowd. But use Adelaide in full, and odds are good that your daughter will be the only one. At #276 in the US, it’s a name everyone recognizes, but few people are using.

Eloise – Eloise instantly makes me think of the enduring Kay Thompson children’s story, set in New York City’s Plaza Hotel. Lately, though, it’s on the rise as a girl’s given name. I think it fits well with Charlotte and Amelia, but at #190, is lower on the popularity charts.

Evangeline – It’s tempting to look for perfect substitutes for Evelyn, and Evangeline is one. At #267, it ranks much lower on the charts that the tailored Evelyn. It’s a smidge more dramatic and romantic, too, popularized by Longfellow’s 1847 epic poem of love lost. But I say it still works.

Genevieve – Or maybe Genevieve is the perfect Evelyn substitute? It takes similar sound and layers in some French style. At #184, it hits the sweet spot exactly.

Miranda – I’m always surprised to realize that Miranda peaked in the 1990s, but it did. The name ranked in the Top 100 for a handful of years. And yet, I don’t think it’s dated at all. Instead, it feels literary and almost traditional. That makes it a great sister name for Charlotte and Amelia. It currently stands at #344.

Vivian – My first thought was Vivienne. But here’s the thing – you’re comfortable with a name that’s just slightly less common, right? At #97, Vivian might be exactly right – somewhere north of fast-rising Evelyn, but not as unusual as, say, Marlowe or Zendaya.

And yet, since you asked for help avoiding another Top Ten name, I’m going to suggest Vivian. The sounds are similar to Evelyn; it has a tailored, but traditional style; and while it’s a Top 100 choice, it’s hard to argue that Vivian is over-exposed.

But I’m curious to hear from readers – what would you suggest as a sister for Charlotte and Amelia, especially if they’d like something just slightly less common?