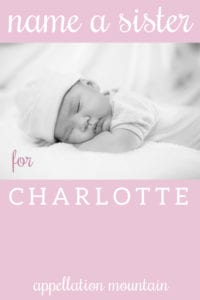 We’re expecting our second baby in July, a sister for Charlotte Jeanne.

If this baby were a boy, we’d have gone with Henry Joseph, which was our boy name for Charlotte. But it’s a girl!

First of all, we know a few Elizabeths. And while I don’t regret Charlotte’s name and it suits her so well, I’m bothered a little that it’s a Top Ten name. I’m not a wild and crazy namer AT ALL, so I’m not saying I want something different. It’s more a feeling that Elizabeth just doesn’t excite me.

Also, because we know some little Elizabeths, I expect that we’ll end up calling her something else. The ones we know are Ellie and Lizzie. Which is fine, but I really like that Charlotte is always just Charlotte.

I keep looking at lists, but nothing is jumping out at me. Can you and your readers help?

How exciting to be expecting a second daughter!

So often we have a rock solid list of names for our children … but then, once we start our families, that list shifts in subtle ways.

It sounds like having a child – and spending more time with other families of young children – has made you realize some things about Elizabeth. Because I agree – while I know plenty of Elizabeths who use the name in full, there’s a real temptation to shorten it for a child.

Happily, there are lots of traditional girl names that fall into the same broad Charlotte/Elizabeth category that might address your concerns – and make a great name for Charlotte’s sister!

I’ll draw from my list of substitutes for Charlotte, plus a few more than seem to fit your style.

Another royal name with a distinctive sound.

Here’s a thought: while we tend to shorten Elizabeth, I typically hear Eliza used in full. Would this name appeal to you instead?

Every bit as classic as Charlotte, and not likely to be shortened.

Rose might work, but it’s a little short maybe. Rosalie could be the perfect sister name for Charlotte.

Tailored and upbeat, Vivian isn’t quite as classic as Charlotte, but it’s a solid style match.

Josephine was very first thought. But my favorites for you are Margot and Vivian – familiar, but not nearly as popular.

I’m not sure how it would sound with your surname or any middles you have in mind, but I can imagine happily saying “These are my daughters, Charlotte and Margot” time and time again.

Readers, what would you suggest for Charlotte’s sister?