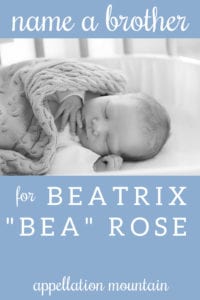 We’re expecting our second child, a boy, in June.

Our daughter is Beatrix Rose, but we call her Bea (pronounced like Bee).

We’re looking for a name that is stylistically similar to Beatrix, but also has a cute nickname.

Ideally the name would also be similarly classic, but not particularly popular. So while we like William and Oliver, they feel too common.

We also want to use the family name Hughes as a middle name.

Current front runners are August/Augusten Hughes (called Gus) or Henry Hughes (called Hank – Henry is generally too popular for us, but Hank feels like it checks the classic, but uncommon box).

We tend to like Gus better than Hank, but like the more formal Henry Hughes better than August Hughes. Should we prioritize the name based on the nickname we like best, given it will be what we call our son most of the time?

We’re also open to other suggestions. Thanks in advance for your thoughts.

Let’s begin with the last question: should you prioritize the formal name, or the nickname?

I think this comes down to how you plan to use the names.

If you intend to introduce your child as Hank or Gus, label it on his backpack for his first day of kindergarten, and sign thank you notes and holiday cards “and Hank” or “and Gus,” then that’s the name you prioritize.

If the were opposite is true – if the nickname is primarily for family use, and he’ll still be Henry or August/Augusten outside of the house? Then I’d choose accordingly.

But it sounds like you’re really deciding between Hank and Gus, and you have a clear favorite.

We’ll get back to that in a minute.

AUTOMATIC NICKNAMES VERSUS ONES YOU THINK ABOUT

There’s one other factor to consider.

Beatrix-called-Bea is so automatic that I doubt it causes any hesitation. Chances are someone would try to call her Bea even if you hadn’t planned to shorten her name!

August-called-Gus is familiar, but plenty of Augusts answer to Auggie, too. And while my sense is that most people know that Hank is short for Henry, it’s far from automatic.

I’m suggest a few boy names that fit your general style and seem like default nicknames.

Strictly speaking, Maxwell started out as a surname. But we hear it as a first, and the most common formal name for Max. Max and Bea are pretty darling together.

Long and elaborate Nathaniel could be Nat, but it most often shortens to friendly, accessible Nate.

There are a lot of formal names for Finn. But while I think Bea and Finn together are brilliant, I’m not sure if the formal name options fit your style.

The good news? Theodore isn’t nearly as popular as William or Oliver. But … it’s gaining on Henry. So while I think it’s a great example of a classic choice with an automatic nickname, I’m not sure it’s a better bet than what’s already on your list.

A BROTHER FOR BEA

Much as I can imagine any of these names with Bea, my vote goes to Gus.

August ranks in the US Top 200 and is climbing in use. But it’s far from the lofty Top Ten heights of some names you like. Both the formal names August and Beatrix and the casual Bea and Gus sound great together.

But I think this is the perfect opportunity to hear from the readers:

What would you name a brother for Beatrix “Bea” Rose?