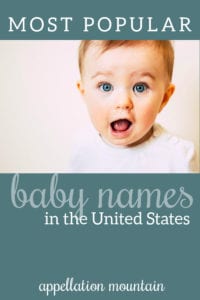 After a long delay, the new baby names popularity data for the United States is here at last!

OLIVIA REPLACES EMMA AS THE TOP NAME FOR GIRLS

There’s very little change in the girls’ US Top Ten, but we do have a new #1: Olivia. The new Top Ten is as follows:

Feeling a certain amount of deja vu? That’s because, with the exception of Olivia/Emma, Sophia/Isabella, and Amelia/MIa swapping places, it’s the same list as last year!

While there’s no change to the #1 name, Oliver and Elijah both moved up, while James, William, and Benjamin slipped. Ethan replaced Logan in the Top Ten.

LUCA AND KAI MAKE THE BOYS’ TOP 100; ARYA FOR GIRLS

New Top 100 names include Luca and Kai on the boys’ side. There’s definitely something different about twenty-first century boy names. They’re vowel heavy, softer, more international than generations past.

On the girls’ side, Arya joined Aria on the list. Credit to Game of Thrones?

NEW BOY NAMES INCLUDE LEGACY, MAC, AND CALLAHAN FOR BOYS

Boy names returning or debuting in the US Top 1000 include Legacy, which has also been rising quickly for girls, along with surname name Callahan, and Max-Gus mini name Mac.

Some fascinating debuts and returns on the girls’ side include sparky retro nickname Winnie, place name Salem, colorful Navy, and traditional Theodora.

FAST-RISING FAVORITES INCLUDE ARCHIE, BAKER, AND CREW FOR BOYS

The most recent not-quite-royal baby Archie, football star Baker, and reality television’s Crew all helped their boost their stylish given names.

On the girls’ side, some fast risers include Stevie, of Schitt’s Creek fame, another Game of Thrones reference from Lyanna, and Elsa. After several years of Frozen hurting the use of Elsa, that seems to have reversed – possibly in a big way – in 2019, the year Frozen 2 was released.

Watch for updates as I work through all the numbers!