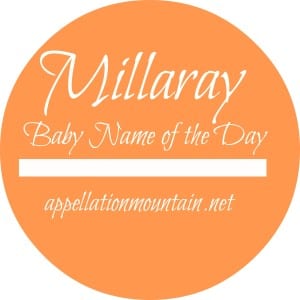 At first glance, she’s a smoosh of two girls’ names on the rise in 2014.  But there’s much more to this possibility.

Thanks to Bertram Bergamot for suggesting Millaray as our Baby Name of the Day.

There must be girls out there named Milla Ray and Milla Rae and Mila Rae, too.  And so, at first glance, Millaray looks like a smoosh name of the modern variety – and a rather appealing one, too.

Except that Millaray is different.  If you look at popularity stats worldwide, she’s big in Chile.  I’m not certain of the pronunciation – this song suggests that it is mee uh RYE, but I’ve also seen mee yeh REE suggested, and this television spot seems to suggest that mee yeh RAY is used.  Certainly, the ‘ll’ sound is different in Spanish, but Millaray isn’t Spanish – she’s Mapuche.

The Mapuche are an indigenous people.  Today their homeland is split between Chile and Argentina, though it was once larger.  Like any native people, colonization was rich with conflict.  There are mestizos – Chileans of mixed Mapuche/Spanish heritage.  But there are also ongoing debates about indigenous rights to land.

The language is called Mapudungun, but it isn’t widely spoken or taught.  In Mapudungun, milla means golden, and rayén means flower.  So Millaray is a golden flower.

I can’t tell if Millaray is a traditional name or not.  It does seem to match the pattern of traditional Mapuche surnames.  And reclaiming traditional names from a language long suppressed and forgotten can be challenging.

But the name’s popularity seems to be tied to the career of actress and musician Millaray Viera.  The daughter of an Uruguayan-born singer, Gervasio, and a Chilean model, I’m not sure if Viera can claim Mapuche roots, but her siblings have Mapuche names, too: Yanara, Nahuel, and Lincoyan.

A side note: Nahuel is also a name from Twilight.  He’s the other vampire-human hybrid, the one that proves Renesmee isn’t an impossibility.  Nahuel is Mapuche – a surprising pop culture boost for a little-known language.

Back to Millaray: she’s performed a Natalie–Nat King Cole style duet with her late father, but has also forged her own career as an actress and model.

Millaray: Wearable in the US?

Viera seems to use Milla as a short form, which brings us back to where we started: how would Millaray be perceived in the US?

As a Milla-Ray smoosh, she’s quite stylish and would fit with modern naming conventions well.  Assuming you wanted to use a more authentic pronunciation, that might be slightly more challenging – though in our age of quesadilla, it isn’t shocking to hear ‘ll’ pronounced as a ‘y’ sound.

The explanation is straightforward, and we tend to be very forgiving of flower names for girls, even the most rare and exotic possibilities.  If girls can be Aven and Tigerlily, why not Millaray?

She’s never been given to more than five girls in any single year in the US, but Millaray is rich with promise.  Whether you’re of Mapuche heritage, or simply like the idea of a seldom-heard name, Millaray has appeal.